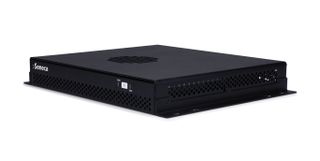 Substandard playback is the Content King’s worst nightmare. What good is killer content when playback is shoddy at best? While the “tech” in digital signage is far from glamorous, it is vital to yield quality visual experiences in keeping with the brand portrayed on-screen. Poor quality digital signage = poor brand impression.

Most recently, Seneca has redesigned and relaunched the Seneca XK-1.3. This purpose built media appliance stands apart from the competition as it utilizes desktop class processors rather than mobile technology usually found in other small form factor computers. Desktop power in the XK-1.3 is ideal for dynamic full-motion video, complex database feeds and HDCP protected content playback.

The XK-1.3 packs the performance of a full desktop but can be easily mounted to a display, under a counter or even on a wall. This chassis is equipped with custom heat sinks thermally optimized for the 7th generation Intel Core processor family to allow for maximum performance without concern for overheating. Heat is the number one failure point for computers. Too often we forget that cooling technology is choked when players are sandwiched between a screen and a wall. Seneca media player cooling technology has been designed with mounting in mind. Seneca players ventilate air through front, back and side of the chassis instead of through the top that is usually obstructed by a screen or wall.

Standing at a mere 1.3” tall, the Seneca XK-1.3 is the thinnest socketed (desktop class) media player in the market, allowing for full desktop power, packaged in an ultra-thin chassis. Desktop class performance is preferred for demanding, dynamic content and real-time analytics where low-wattage mobile chips just won’t suffice. Users on desktop class processors can expect performance gains of over 20% versus the comparable mobile processor thanks to increases in clock speeds, cache, and core counts. XK1.3 supports Core I3, I5 and I7 Intel processors.

Seneca reputation for quality manufacturing and OEM services continues on with the release of the XK1.3 media appliance. Not only will customers enjoy the unique performance features, but also the long life availability of the platform, through 2022. All Seneca media players are long life, commercial platforms and carry a 5 year limited system warranty.