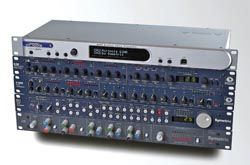 Introduced in the early '80s, the Symetrix 528E voice processor was conceived as a cocktail napkin sketch and grew into one of Symetrix' most successful products. A variant of the original, the 528 (shown above with the new 6200 Air Tools digital version) is still used extensively in broadcast and recording studios and live PA.
Butcher took a job working for Greg Mackie at Tapco and learned to design electronics, and just six months later in 1976, Butcher started Symetrix. A surplus electronic components company was located across the street, and with their parts Butcher manufactured the very first Symetrix product, the SG-1 Signal Gate, and the company's subsequent compressors, limiters, and phasers. After about two years, the small Symetrix team was able to cast off their odd jobs and devote themselves fully to the company.

Symetrix's first products were aimed at the studio and live PA markets, but as the years went on, Butcher and his team developed a knack for finding and fulfilling unmet needs in related markets. One of their early and enduring hits was the 528 voice processor. A variant of the original 528 voice processor-the 528E-is still sold today and used extensively in recording studios, live PA, and broadcast studios.

"We decided to communicate our dedication to each market by branding our products accordingly," Butcher said. With that decision, the Lucid, AirTools, and SymNet brands were launched.

The future of Symetrix will be grounded in its past success, and Butcher's original dream of designing high-performance, yet affordable, equipment will serve as its cornerstone. "Symetrix has been around for a long time, and people say we make good products," he said. "As long as our customers perceive us as a partner that will help them be successful, we can both be successful together."