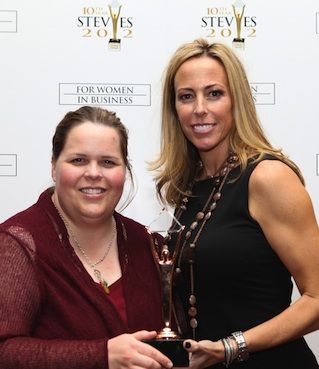 Pivot Communications was named a Winner of one Silver Stevie Award and three Bronze Stevie Awards at the 9th annual Stevie Awards for Women in Business in New York City.

Pivot was awarded in the categories of Company of the Year, Management Team of the Year, Executive of the Year, and Entrepreneur of the Year for Business Services in Advertising, Marketing, & Public Relations.

The Stevie Awards for Women in Business honor female entrepreneurs, executives, and the organizations they run. All individuals and organizations worldwide are eligible to submit nominations—public and private, for-profit and non-profit, large and small. The 2012 awards received entries from 17 nations and territories.

Pivot Communications and co-founders, Jane Johnson and Erin Bolton, were recognized for their significant accomplishments in growing Pivot and creating success for their clients.

"It was a great night for Pivot," said Jane Johnson, managing partner of Pivot. "The Stevie Awards for Women in Business program is highly respected and it's a privilege to receive these awards."

"We're pleased to be among the many outstanding companies and women who are recognized by the Stevie Awards," said Erin Bolton, vice president of strategic sales initiatives at Pivot. "It's rewarding to have our work highlighted on an international stage."

Stevie Award winners were selected by more than 200 executives worldwide who participated in the judging process this year.

"This year's Stevie Award-winning women are the most accomplished, impressive group we've ever had. Their stories of success will be an inspiration to women around the globe who dream of starting and growing a business and making a difference in the world," said Michael Gallagher, founder and president of the Stevie Awards.