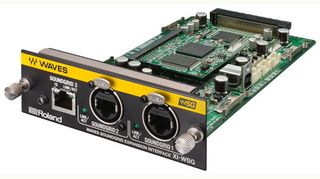 The What: Roland’s Professional AV Division is now shipping the XI-WSG Waves SoundGrid Expansion Card, offering even more system possibilities for the M-5000 Series consoles, based on the OHRCA platform.

The What Else: “The XI-WSG Waves SoundGrid Expansion Card gives M-5000 users the ability to use the incredible collection of Waves plug-ins that many audio professionals find indispensable and further builds the M-5000’s reputation as the most complete integrated live audio system available,” said Christian Delfino, vice president of Professional AV for Roland. “The OHRCA platform takes the guesswork out of live audio system integration with a single platform that seamlessly integrates 128 channels of configurable audio mixing with a wide range of digital snake options, 40-channel customizable M-48 Personal Mixers, standalone multichannel hardware recording with virtual rehearsal, and now our fourth XI Series Expansion Card, which adds direct Waves SoundGrid integration alongside the Dante, MADI, and REAC options already available.”

The Roland M-5000 and M-5000C Live Mixing Consoles are based on the OHRCA platform, which opens a new generation of live sound solutions for audio professionals. “OHRCA” stands for “Open, High-Resolution, Configurable Architecture,” and the M-5000 Series reflects this by delivering freely definable audio paths, supporting multiple audio format protocols, and offering 96kHz sound quality throughout the system. The Roland M-5000 Series’ internal mix architecture is not fixed and can be freely defined for mixing channels, AUXs, Matrices, subgroup buses, and MIX-MINUS buses within a range of up to 128 audio paths, allowing users to create a console structure to suit the needs of the application. The consoles can support up to 300 inputs and 296 outputs, all at 96kHz and even more at 48kHz and allow for integration of multiple multi-channel audio protocols including Dante, REAC, and MADI.

“We are excited to join forces with Roland, enabling the use of Waves compressors, EQs, reverbs, delays, and other award-winning audio plugins in low latency directly from your Roland M-5000 live sound console,” said Mick Olesh, Waves EVP of sales and marketing. “Used in leading recording studios, mixing rooms, and mastering houses the world over, Waves’ industry-standard plugins are now at your fingertips behind your Roland FOH or monitor desk.”

The Bottom Line: Taking full advantage of Waves’ SoundGrid networking technology, the XI-WSG has three ports for connection to Waves SoundGrid Servers, allowing for low-latency, redundant audio connection and direct connection to a PC for MultiRack SoundGrid control without the need for an external network hub. The XI-WSG accommodates 64 inputs and 64 outputs for integrating Waves’ high-precision plug-in processing, multitrack recording, and playback with an M-5000 Series Console.