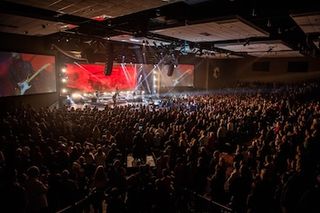 Bayside Church has a total of four locations, and over 12,000 members of the congregation attend worship services on any given weekend.

Bayside Church and Brewster, who frequently leads worship at the church when not on tour, have considerable influence on the Christian scene.

“Lincoln was very much involved in our decision to replace our existing d&b system with the NEXO system,” said Lee Fields, senior audio director for all audio systems and audio staff across the campuses. “It was really a joint effort; Lincoln trusts me, but at the same time, I don’t underestimate his talents either. He is an incredible audio engineer in his own right. After all, he has mixed most of his own records.” The NEXO system was purchased through Special Event Services (SES), Sacramento.

Fields said that the core of the change in line array systems was that the church seating had changed drastically.

���The d&b system was a point and shoot system that mainly covered the floor (about 900 seats), and large delay boxes covered the remaining 1,000ish seats in the bleacher sections. The new seating arrangement is still 900 on the floor and another 1,400 or so in new stadium-style seats, adding in another 500 new seating locations. With the previous system, over half of the seating area would have been in coverage by delay speakers—not ideal with the worship experience we are trying to create. The NEXO line array has allowed us to cover the room much better from a single source, and every seat sounds amazing and surprisingly similar to the next.”

The second reason for the change out the system was a bit more philosophical Fields notes. “Lincoln and I both have been to hundreds of churches and have seen a variety of PA systems: PAs that rival stadium touring rigs, PAs way too small for big rooms, PAs way too big for small rooms, PAs that sound great and are just right for a church, and PAs that cost way too much money for a church to be spending money on. With all that said, we finally found a product that far exceeds our needs sonically and that is also a perfect representation of being a good steward when it comes to our church’s money. This is the biggest win for us on a personal level, knowing that we didn’t have to spend zillions of dollars on a system. We are astonished by the performance of the GEO S12 rig/ It feels great knowing our church can go about the duty of assisting people with the money we saved by choosing the product we did, and we didn’t sacrifice anything, rather, we gained everything.”

Fields has been a touring engineer for close to ten years and says he’s literally seen all of the various line arrays available. “I kept running across the GEO S12 at medium size festivals, at conferences, and other events. Every time I got my hands on them, I loved them. A huge bonus is how supportive the team at Yamaha Commercial Audio Systems has been. Jake Cody, the House of Worship Manager, has been an invaluable resource to me, Lincoln, and to our church. The heart of the Company, and Jake, is to help churches in anyway they can. The same can be said for Greg Slape from SES. They believe that NEXO being an elite brand can provide churches what they require in a line array, but at an affordable price point. The quality of the service from Yamaha and SES is unmatched in this industry, and I don’t think anyone would disagree.”

“We chose the NEXO Geo S12 because it was the best sounding box we tried,” added Brewster. “It also happened to be the least expensive, and in my opinion, is the best value in line-array systems today.”

The three other Bayside Church locations are using NEXO systems with NX Amps and Yamaha LS9 Digital Consoles. In total, there are over ten Yamaha digital consoles across all Bayside Church venues.