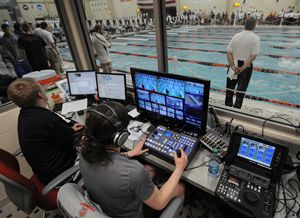 Built in cooperation with the town of Christiansburg and Virginia Tech, the 64,000 square-foot facility features a full-size, 50-meter Olympic-style pool — double the length of the pool at their previous location. The facility also features two 1-meter springboards, two 3-meter springboards and a diving tower with 5-, 7.5- and 10-meter platforms. The venue can seat up to 1,000 spectators that can watch the swim meets on the massive scoreboard and video board adjacent to the diving boards and platforms.

In the winter of 2012, the facility drew conference-wide recognition by serving as the hosts for the ACC Championships. “We wanted to make sure we were capable of streaming live SD video to the cable networks, showing live HD video on our video board and still be able to make DVD copies for our participants,” explained Kevin Hicks, director of broadcasting and Visual Media at Virginia Tech.

After bringing in Jim Hogan of IES Commercial, Inc. – and a year of convincing, planning and designing – they installed an HD/SD Vaddio camera system.

“Originally they wanted to put in a broadcast cable system for TV coverage,” Hogan said. “When it came down to it they thought, ‘Why put in all this expensive broadcast equipment when it might only be used once in a while’ – and they wanted the ability to do streaming with multiple cameras. We suggested the Vaddio systems.”