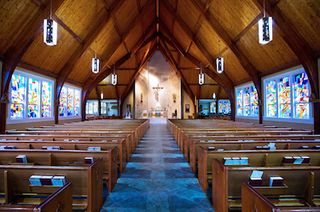 The interior of St. Patrick's Catholic Church in Rockville, MD. The sanctuary's 35-foot-high A-frame ceiling and windows presented a challenge for sound clarity in the past."The sanctuary has an A-frame architecture with 35-foot ceilings and lots of windows," Ingham said. "The altar area is in the center, the choir is on one side with the organ and piano, and most of the congregation sits directly in front. The original sound system did not project far enough, so it was like a cloud of sound coming out of the sky, lacking clarity and intelligibility."

"RCI Systems uses the Renkus-Heinz IC Live Series for our event production business, so I'm very familiar with its beam-steering technology," Ingham said. "We do a lot of work in very reverberant spaces, and IC Live is a real problem solver for us. St. Patrick's has a traditional service with organ, piano, and choir, and speech intelligibility is important for them. The IC16-RNs sound great and have plenty of power."

With high ceilings and a transept, installation and tuning could have been tricky, but Ingham said he accomplished it with relative ease. "We used two beams for each loudspeaker to cover the room, and the beam coverage was so wide that I only had to put two IC16-RNs in, and it still covers the main room and at least half of the transept," he said.

"Initially I was going to put the loudspeakers closer to the audience," he continued. "But when we looked at the modeling, we found that if we could place the loudspeakers to the left and right of the altar, about nine feet up, we could shoot over everything and still get plenty of sound in the back. The new RHAON II software made it come together very quickly. And with the IC16-RN's low-profile design, half the people don't even know the speakers are there."

The job went so smoothly, Ingham said he was even able to finish ahead of schedule. "I budgeted an extra day, and I didn't need it," he recalled.

But in the end, the highlight of the system is its sound. "The best part is the direct field: when you're anywhere in the main body of the church, the coverage at every seat is the same," Ingham said. "I attended a service, and whether the vicar used a handheld wireless mic, a gooseneck mic, or the altar mic, his tone sounded the same through the Iconyx speakers. It was a pleasure to hear." Others noticed the difference, too. "While we were tuning the system, a parishioner remarked 'I've never heard it sound this clear back here before,' " he said.