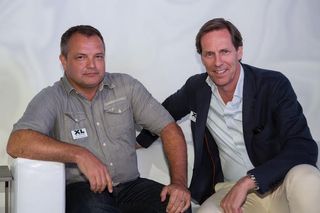 Left - Rene De Keyzer; Right - Lucas Covers
Rene comments: “After many years leading the XL Video group of companies, I was happy to pass that role to Lucas Covers and to seek a new challenge within the group. Following our strategy review last year, it became clear that XL Video US needed renewed focus to develop the business in line with our strategy for growth, and I’m very excited to lead the charge in taking our US operations to the next level.”

The New York event was held in advance of the New York Auto Show this week, where XL Video will supply video solutions for a range of exhibits at the show.

Attendees were also treated to demonstrations of some of XL Video’s latest solutions including products from XL’s major LED investment earlier this year. High-resolution LED products were shown, as well as the MC-18 Hybrid LED which integrates powerful LED spotlights with a lightweight 18mm LED screen.

Lucas Covers comments: “The new LED solutions we have demonstrated at this event are just part of our multi-million dollar investment in new technology across the XL Video group.