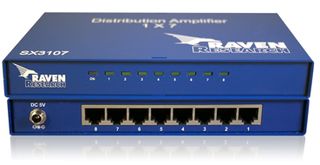 The What: Raven’s new SX3107 1x7 UTP-based distribution amplifier not only can distribute a single digital video input to seven outputs, it also serves as a signal resync and reclocking mechanism capable of being placed 160 meters/525 feet away from a Raven transmitter, a Raven receiver, or another Raven SX3107.

The What Else: Because of its reclocking and resyncing attributes, there is no limit to how many SX3107 units can be used—tier and/or cascade SX3107 products as many times as needed in order to reach any number of screens. Raven’s SX3100 Series transmitters and receivers and the SX3107 DA handle formats to 1920x1200 resolution video (including 1080p) plus embedded audio, IR, and bi-directional RS-232 and USB signals. When utilized with the SX3107, USB signals remain fully functional for two–way operation with a single “master” Raven receiver, while RS-232 is functional in broadcast simplex fashion, useful for “turn on” or “turn off” commands for example.

The Why: “In carving out Raven’s existing market niche, our products have become a go-to replacement for installers and integrators tired of dealing with sub-par digital extension products, said Raven Research CTO Chris Miller. “Now that Raven has solved common digital connectivity issues, we are extremely pumped to overcome standard distance constraints with the introduction of the SX3107.”