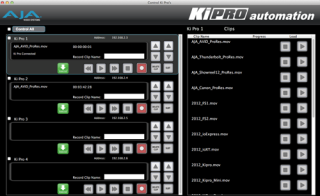 “HRS KP Automation has been designed to enhance the out-of-the-box experience of Ki Pro customers,” said Drew Taylor with HRS Control. “We saw interest from AJA customers who wanted gang control capabilities for their Ki Pros. They were looking for a simplified, cost-effective solution for Ki Pro only control; they didn’t need to build customized solutions with our UDC (Universal Device Control) product. So we devised a completely new application to control multiple Ki Pros from one location.”

“The new app can be downloaded and used right away,” he reports. “There’s no learning curve, and no training is required. You put HRS KP Automation to action immediately.”

HRS KP Automation is a base-level product offering the features and functionality that most Ki Pro users require and supports Ki Pro, Ki Pro Rack, Ki Pro Quad and Ki Pro Mini. With Ki Pro Automation “you can execute gang playback and record, download clips and do file transfers to your local Mac or network hard drive for back up,” Taylor said.

The app also displays current time code, current clip name and shows the progress of clip downloads as well as proving users a range of additional status information for each Ki Pro. It also permits scheduling of recording, playback and downloads.

HRS KP Automation PRO includes all the features of HRS KP Automation and more. The PRO version adds RS422 control (supported by Ki Pro, Ki Pro Mini and Ki Pro Rack, but not by Ki Pro Quad) for the ability to load a clip and jump to a specific point in the time code. It also gives you the ability to upload clips from a network or local computer and to transfer clips from Ki Pro to Ki Pro. In addition, it enables users to store hot keys on the fly for any Ki Pro product that load a clip and jump to time code – “a playback utility that people with more demanding live productions, such as sports replays, are looking for,” said Taylor.

The apps’ interface design looks and feels familiar to users of AJA Ki Pro products. The layout features two columns. The left-hand column features buttons for transport commands and a download button for each Ki Pro unit. The right-hand column always shows clips on the selected Ki Pro; downloading is tracked with a progress bar. Selecting more than one Ki Pro unit for control triggers gang control with one-button execution.