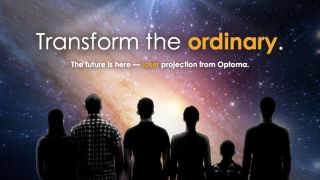 This article was sponsored by Optoma Corporation.

The growth curve for flat-panel displays in professional settings is anything but flat, but video projectors will continue to thrive in a wide assortment of pro-AV installation applications, led by more affordable and reliable laser-diode projectors.

Flat-panel growth has been propelled by falling panel prices, higher brightness levels, and less maintenance compared to lamp-based projectors, yet in many applications, flat panels aren’t up to the task, said Optoma Technology, a top-three seller of projectors in the U.S. pro-AV channel.

Projectors are the right choice, for example, in medium-size and larger venues, including typical classrooms, where displays exceeding 75 inches are needed to make basic presentations easily readable by everyone in the room. In these applications, projectors are more cost-effective. At screen sizes of 84- to 98-inches, flat panels cost 10 to 90 percent more than the projection alternatives, and at 108-inches and up, flat-panel options just don’t exist. If an interactive solution is needed, projection’s cost advantage grows further (See Interactive Display Solution chart).

Pro-AV Benefits in the Classroom

With a 65-inch flat panel, only about two students would be close enough to engage in analytical reading of detailed information such as information in Excel spreadsheets and chemistry tables, added Brawn Consulting. Eight students would be positioned optimally only for basic reading. And in a conference room, all viewers must be within 9.5 feet of an 80-inch flat panel to get a desktop-equivalent viewing experience or better, PKE Consulting found.

In K-12 classrooms, Optoma suggests laser- and lamp-based ultra short throw (UST) projectors delivering anywhere from 3,200 to 6,000 lumens, such as the Optoma ZH400UST based on room size and ambient light levels (See Optoma Laser Projectors). And in larger venues such as higher education lecture halls, Optoma suggests ultra-short to ultra-long-throw laser- and lamp-based models delivering 4,000 to 12,000 lumens, such as the ZU850.

For his part, Futuresource analyst James Kirby foresees “a wealth of lucrative opportunity for projection within large-screen applications and even within certain digital-signage applications.” Because of “large possibilities in relatively untapped markets such as retail and hospitality, projection has the ability to offer a unique display solution to a large total addressable market,” he added. “Projection mainly loses share within those verticals that don’t have a specific requirement for large screens,” Kirby continued. For example, in meeting rooms with less than a 16-person capacity, “a flat panel may compete with a projector in terms of price, and provide great enough size.”

More Advantages: Other projection advantages include the ability to scale images to many sizes, and projectors are easier to install than large flat panels, requiring only one installer instead of three, Optoma said. Projectors also deliver wider viewing angles, better reflection rejection, and greater portability. Projectors can be moved to different walls, rooms and venues entirely.

For now, flat panels have the edge in brightness, but projectors fill niches that flat panels can’t at any brightness level. Among them: projecting images onto curved surfaces and onto 3D objects (projection mapping) such as building exteriors and vehicles in car-dealer showrooms. In addition, creating a large bright image up to 500 or 600 inches is less installation-intensive and more cost-effective when “stacking” multiple projectors instead of tiling multiple flat panels on a wall, said Brian Soto, Optoma’s head of U.S. product management.

In the class room, projectors deliver an additional benefit. Not only are flat panels more likely to get broken accidentally in classroom settings, but interactive flat panels require more maintenance because dust particles collect between the display glass and the touch overlay, Soto said.

Laser longevity also reduces lifetime ownership costs below that of lamp projectors – even after factoring in laser’s up-front up-to-50 percent price premium. With lamp life typically hovering around 2,500 to 3,000 hours, you’d have to replace a lamp up to eight times to match laser’s 20,000-hour life span. With lamps and filters typically costing $299, plus a $350 labor charge, the cost of eight lamp and filter replacements hits $5,192, said Bob Guentner, Optoma’s senior manager of technical sales and training. “There are virtually no maintenance costs with laser at 20,000 hours,” he said.

Because they run cooler, laser projectors can be mounted in any projection direction at any angle without the risk of heat buildup, which occurs in typical lamp projectors whose airflow might be restricted by an unusual mounting angle. As a result, laser projectors can be mounted on the ceiling to project down to the floor or mounted to the floor to project up to the ceiling. That opens up new sales opportunities because, obviously, ceilings and floors aren’t the best places to install flat panels. Likewise, laser models can be mounted in portrait orientation.

Laser’s growth niches include short- and ultra short- throw laser projectors intended to replace lamp projectors currently in classrooms and conference rooms, Guentner said. Such projectors are well-suited for interactive presentations because users can manipulate images by touching the projected image without blocking the projection beam.

Because of laser’s advantages, “the projection market is growing again in education,” Soto added.

And laser is just getting started. “We’re still in the early stages of laser,” said Jon Grodem, Optoma’s senior director of strategy and planning. “Every generation of laser brings about higher brightness and a higher lumens/watt ratio as laser diodes come down in price.”

eBrochure: The Future is Here