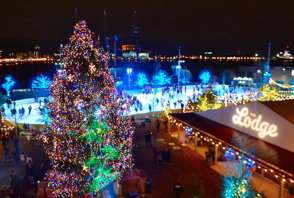 For the thousands of skaters that attend RiverRink each day, the Powersoft Deva system delivers up to 115 dBs of pristine audio — while consuming a diminutive physical footprint and remaining completely energy independent. Two of the Deva units are programmed to take photos of skaters at regular intervals, enhancing the overall entertainment experience. After the rink closes, the system — which is controlled over a wireless LAN — is able to provide intelligent surveillance and active monitoring of the premises.

Williamsport, MD-based Live Sound Co., which handled design and integration of the Deva system, was given a preview of the Deva system over a year ago by Claudio Lastrucci, Research & Development Director at Powersoft. "Our first installation of Deva is the culmination of our efforts with Powersoft, and their incredible engineering vision," commented Jeremiah Leiter, President of Live Sound Co. "When we turned the units on and they were working exactly as we hoped they would, it was such a feeling of pride. We don't just want to sell products to our clients, we want to help them solve problems. This is exactly what the Powersoft's Deva enables us to do."

A Small Revolution in a Smart City
The Philadelphia RiverRink installation is comprised of four Deva units mounted on two steel poles on opposite sides of the skating rink. A fifth Deva unit is mounted on a pole and pointed towards the entrance of the rink. Each unit — which measures approximately 12" x 18" and weighs just under 22 lbs. — comprises an active loudspeaker, an interactive messaging system, high powered LED lighting, an FM tuner, built in GPS, presence sensors, Wi-Fi and many other intelligent features.

In all his years of doing systems integration work, Live Sound Co. Chief Operating Officer Nik Mondo has never seen such a revolutionary product. "As far as I know, there is no other product on the market that combines such a compelling feature set," he says. "The icing on the cake is that they can be solar powered and have a built-in battery, so they don't require external power sources. This means that you don't have to worry about the typical power restrictions that might be faced in other scenarios with other competing products on the marketplace.”

While the RiverRink installation was initially set up as a 'proof of concept' to demonstrate Deva's features and functionality, Nik Mondo, who hails from the City of Brotherly Love, is confident that the council will soon find other 'smart city' applications for the unit: "I would like to see Deva installed alongside the trails along the Delaware River, all the way to South Philadelphia," he says. "Such a system could provide messaging and an added measure of assurance and security for pedestrians, especially in areas where there is not a lot of lighting or public infrastructure."

"Security is such an important consideration for just about any metro area," Mondo continues. "On this product, there is a light, a camera, an FM tuner, a motion sensor and a speaker all in one. So if somebody walks in front of the unit, it can trigger a predefined message — or it can photograph surroundings at predefined intervals. All of this activity can be monitored from any location via the network."

Design Intelligence, Ease of Integration
Deva's intelligent product design carries through to its unmatched ease of installation: "We can install each unit in about seven minutes," says Mondo. "The mounting and set up is very simple and exactly what you would expect from Powersoft." The power is supplied via solar panels, which are positioned and clamped directly to the truss above each unit." As engineers, designers, installers and integrators, we are used to dealing with complex levels of components, software and other considerations to make things work right," says Leiter. "Deva is a joy for us because it is so easy to get it up and running — all the functionality you could ask for is at the ready for the end user."

Once the system was up and running at RiverRink, the audio quality did not disappoint. "When we first fired it up and played music in the rink, all the audio engineers and staff had smiles on their faces. The audio was crisp, clear and articulate," Mondo says. Initially, he was concerned that the four Deva units would not cover the 98' x 200' rink space, due to their modest — yet sleek — physical presence. "I was extremely worried that four units may not cover all that space," he recalls "To my surprise and excitement, they audio covered the entire rink with ease and even bled out into other areas beyond the rink when we needed it to."

Having completed its first successful Deva installation at RiverRink, Live Sound Co. is eager to approach other new markets with Powersoft's latest solution, which is among the first to combine such valuable features in a physically compact and ecologically minded design. New markets and potential applications include amusement parks, zoos, campus environments and other city municipalities — all of which could likely benefit from Deva's interactive messaging and security features. "We really believe in this product since it represents a potential solution for so many things," says Samuel Leiter, Executive VP, Live Sound Co. "We have an open invitation for any city official in the U.S. to visit us in Philadelphia to preview what these units could do in their own cities."

To learn more about Powersoft's Deva, please visit: http://www.powersoft-audio.com/en/multimedia/deva. For more information on Live Sound Co., contact Nikolas Mondo at info@livesoundco.com or by phone at 1-800-977-5350.