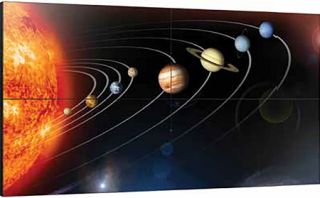 Samsung’s 4K QMD Series display At the IFA 2014 technology show in Berlin, LG unveiled its latest UHD (ultra-high-definition) television. The manufacturer says that the 98-inch 8K TV (7680 x 4320 pixels) delivers 16 times the resolution of a normal 1080p HD television, and four times that of the latest 4K TVs. For those in the market for displays, this begs the question: is 4K a wise investment when 8K seems to be a fait accompli? Or is it?

LG itself doesn’t believe so. “Sure, there’s some chatter out there about 8K, especially for things like digital cinema, but for commercial and consumer displays, 8K is still a way’s off, and the same can be said about 8K content, too. Even then, it will only make sense in really big (150-inch plus) screens,” said Dan Smith, director of digital signage at LG Electronics USA. “LG has 8K technology today, but we believe 4K is where a material change will occur in 2015.”

At this time, 8K is being applied by several broadcasters such as the BBC, and only then on a trial basis, noted Chris McIntyre-Brown, associate director at the UK-based tech consultancy, Futuresource Consulting. “There are very few commercially available 8K cameras, the compression technology doesn’t exist to make 8K a commercial reality, and the sheer amount of data is a headache for 4K let alone 8K within a live broadcast environment.” He suggests that, for the time being, the content for 8K displays in the B2B world will be limited to either upscaled 4K content, or the 8K content that is shot during these trials–– also limited. “8K investments are a long way off from being a viable commercial option. Whilst 4K has been a discussion for many years, we are only now seeing this becoming a mass market product, and even then, limited to niche verticals.”

Andy Howard, founder and managing director of Howard & Associates, a video technology consulting firm based in Madison, Connecticut, admitted that 8K isn’t really on his radar screen yet, “unless you have a very specific application that requires super-high-definition because it’s something that you’re trying to gather a crowd with, or it’s some sort of public display that’s supposed to blow people away,” he said.

A menuboard install with Samsung’s mainstream D Series displays (1080p). Howard’s clientele is largely made up of multinational enterprises that do a lot of video streaming, and one of his primary concerns is the back-end management of all that content. “You need to think about things like storage and distribution—the resolution of 4K is four times as much resolution [as 1080p], and it’s also four times as much storage, and then 8K is eight times, to put it simply,” he said. For now, his clients are happy with the quality of 1080p at 60 frames a second for their specific applications, which largely involve videoconferencing or streaming.

Like Howard, for Paul Murdick, president of technology solutions at TSI Global Companies, a systems integrator headquartered in St. Charles, Missouri, resolution requirements are dictated by the specific application. The healthcare market, for example, benefits from high-definition, as do the architectural and construction industries, but it may not be a requirement for the boardroom. That said, he does advise clients to prepare for the future. “4K is coming. If we’re putting in a new presentation system, most of the switchers are 4K-ready. We want to make sure we spec the system so that we can transport 4K, and then when they’re ready to get that image device––that LCD panel––then their infrastructure will support what they want to see,” he said.

Chris McIntyre-Brown, Futuresource Consulting As is the case with 8K, one of the main concerns surrounding 4K is the availability of 4K content. Thomas Evans, director of display product marketing in Samsung’s Enterprise Business Division, argues that this is less of an issue for organizations deploying digital signage versus those who rely on UHD broadcaster content. “Creating video or animated content in UHD is well within the grasp of most creative agencies or even in-house art directors,” he said. In fact, he adds, users may create 4K content “with remarkable clarity” on Samsung’s own Galaxy S5 smartphone.

“It is now easier than ever to capture content in 4K and drive it to a display,” said Becky Connors, product marketing manager at display solutions manufacturer Planar Systems Inc. “As new developments in 4K content creation and distribution become available in the upcoming years, the 4K displays currently on the market will be compatible.”

Crestron’s DM-RMC-4K-Scaler-C Crestron Electronics, heavily focused on 4K, underlines the importance of building infrastructures that support a resolution that it believes will become ubiquitous not so long from now. “If you install a 1080p switcher now and that system is supposed to last for five or seven years before it gets refreshed—which is very common—you’re basically betting that no one is going to want to display 4K in that room until your next refresh,” said Tom Barnett, director of marketing communications. “That’s probably not a safe bet.”

Barnett’s colleague, Justin Kennington, product line manager for Crestron’s DigitalMedia system, said that in designing infrastructure, tech managers need to be aware of the cabling requirements that are mandated by 4K. He counsels the use of cabling that adheres to the standards out over specialty cable. “Maybe you need to make a 90-metre run of HDBaseT with 4K, and you’ve found a product that does that. But then, three, five, or seven years from now when you’re refreshing the room entirely, is that cable still going to be useful?” he said. If that cable was indeed purpose-built, there is a good chance that that “purpose” doesn’t exist anymore. “You want something that adheres to some sort of advanced, cutting-edge industry standard, and for cable, that comes down to the TIA/EIA category certifications.” He added that a solid cabling solution also accommodates the low error rate specification set out by HDMI. He pointed to Crestron DM Ultra Cable as an example of standards-based CAT7a cable, suitable for 10 Gigabit Ethernet, that also enables lossless distribution of 4K over HDBaseT at distances of 330 feet (100 metres).

Becky Connors, Planar SystemsAndy Howard, Howard & Associates Scaling technology is another factor that comes into play with 4K, Barnett explained, especially while systems are in transition from 1080p to the higher resolution. He noted that during this transition, some system sources may already be 4K, while others may still be 1080p. “What you need is a switching and distribution architecture that lets you take any of those resolutions in and output a signal in any of those resolutions, so that everybody sees as many of the original pixels as possible—preferably all, but sometimes you’re going to go down to a lower resolution,” he said.

Distribution and storage issues aside, what will advance the move to 4K is what usually drives a shift to newer, higher performing technology in the enterprise: users will have become accustomed to higher resolutions not only at home, but on their laptops. “Amazon will sell you a pretty nice 4K TV for about $1,500 (U.S.) now. More and more of your presenters will be using their MacBook Pro with Retina display, and if they’re used to looking at their spreadsheet with 27 columns and on the meeting room display only 14 of those columns are showing, it’s frustrating for everybody,” Barnett said. “The expectation of the meeting participant is always: what I see on my laptop, the AV system will show on the room display so that everyone in that room can see exactly what I see. And there’s a storm brewing if you’re not giving yourself the ability to transmit as many pixels as the person is seeing on their laptop screen.”

According to Futuresource Consulting, 4K TV sales comprised five percent of global demand in 2014, and will increase to 35 percent by 2018. Chris McIntyre-Brown, associate director at Futuresource, noted that one factor driving 4K adoption is that panel manufacturers and set vendors are using the technology to improve margins—much as they attempted to do with 3D.

“For some time now, panel manufacturers have struggled to make FHD (full-high-definition) panel production—especially in the consumer segment—a profitable business,” McIntyre- Brown said. 4K panel production presents the opportunity to increase margin by a few points, resulting in a return to profitability. Price competition between manufacturers will also drive end users to opt for 4K solutions, even if they don’t necessarily need them yet. “In the majority of digital signage applications and presentation spaces in corporate and education markets,” McIntyre-Brown continued, “we don’t see the requirement for 4K content. But from a marketer’s perspective, if the cost of a 4K screen is close to full HD, the question is not: why should I invest? But, if there is the chance I may need it within the lifetime of that screen, why shouldn’t I invest?” —CH

The What: Hall Research states that its new 4K-Javelin active-plenum HDMI cables utilize the latest in optoelectronics to extend HDMI signals beyond the typical limitations of copper cables.

How Do They Work? The cables are a hybrid of fiber and copper that allow HDMI signals to be extended 200 feet or longer with zero loss. All PC and HDTV resolutions are supported including 4K Ultra HD . The HDCP compliant cables also support DDC and CEC . Proprietary circuitry is conveniently incorporated inside the HDMI connectors to convert the video signals to light pulses and back. The cables are available in standard lengths to 200 feet. No external power supply is required as power is drawn from the 5V signal pin of the source HDMI output. The 4K Javelin cables are thin, flexible, and lightweight (only 12 oz for 50 feet cable).

The Bottom Line: The 4K Javelin can be used like regular HDMI cables but without the worry of boosters or equalizers. Being Plenum-rated, also makes it possible to be used in virtually any installation environment. Applications include, home theater, conference rooms, schools, airports, hospitals and more. Hall Research is currently stocking 50, 100 and 200-foot lengths.

DVIGear has launched its models DVI-7313 and DVI-7314, single-fiber optical extenders that support 4K / 30p resolution signals up to 1.2 miles. They support HDMI v1.4 (non-HDCP) signals with resolutions up to 4K (4096x2160 / 30p) over cable distances up to 1640 ft. (DVI- 7313) and up to 1.2 miles (DVI-7314). Most single- fiber optical extenders transmit signals over multiple optical wavelengths, which can suffer from chromatic dispersion over long cable runs. To avoid this issue, DVI Gear representatives said that these extenders employ a high-speed SerDes that combines the DVI/HDMI signal channels into a single uncompressed 10.3 Gbps bit stream. This enables the optical transmission of the signal over a single optical wavelength, which provides increased signal fidelity, stability and flawless image quality, regardless of cable length. Visit www.dvigear.com for more details.