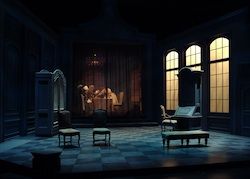 There are accounts of lighted images being projected onto public buildings and monuments as far back as the mid-nineteenth century. But it has really only been since about 2010, when widely available handheld devices enabled videos from a rash of outdoor art and marketing events held worldwide that year to go viral, that projection mapping began to enter the larger public consciousness.

One of those global events in 2010, known as the Ralph Lauren 4D Experience, described by the luxury retailer as “a collision of fashion, technology, art, commerce, and architecture,” was an art, fashion, and architecture installation to celebrate the company’s tenth anniversary of e-commerce. The installation featured moving “3D” images mapped and projected onto the façades of the company’s buildings in New York and London.

Joshua Weisberg is one of the founders of New York-based AV specialists Scharff Weisberg, the company that staged the Ralph Lauren 4D event. Now president of WorldStage, an amalgamation of that company and Video Applications of Southern California, Weisberg explained the process for mapping a large building.

Not all video servers offer the requisite functionality, he noted. “The server that does it most comprehensively is the D3 server made by UVA Technologies.”

Thankfully, digital video projectors offer a certain level of functionality, including warping and blending, to counter such obstacles. “We use those sometimes in combination with servers or sometimes on their own, if the project is simple enough. For the more complex ones you really want to use the server.”

Manufacturer Digital Projection, Inc. was involved in some of the first installations to implement large-scale mapping, according to Chuck Collins, vice president of sales. “I think the first big name theater to use it was the Oregon Shakespeare Festival. They used our Lightning projectors, which are 30,000 lumen projectors, creating imagery in the background.

“Instead of having a set designer paint or create something in the background to create the emotion and the ambiance, they projected it. They found it much quicker and easier and effective.”

Then, in mid-2003, he recalled, Seattle Opera inaugurated its new house with a presentation of Richard Wagner’s “Parsifal”.

Digital Projection supplied four Thunder1000Dsx projectors and Scharff Weisberg provided an eight-screen Watchout system for the production. Dataton’s Watchout is multi-image presentation and display software that orchestrates still images, animation, graphics, video, sound, and live feeds into a single show. “Those were just projections on a screen; now they're going three-dimensional, warping the projector's image electronically so it can project onto a curved or irregularly-shaped screen,” Collins reported.

For less complex structures, in-projector functionality may be enough, said Collins. “We have two key features in our Highlight, Titan and Lightning projectors, and that is warp and blend. Warp allows you to electronically shape the image to a curved or irregular screen, including protrusions and things like that. Blending allows us to blend the images of two or more projectors to create a very weird aspect ratio, and therefore increase resolution.

“Things like lens shift are really important. People always want to put the projector higher than the screen, which introduces keystone. Or if there's a column in the way they have to go off to the side rather than dead center.”

Typically, he added, “Designers are interested in raw horsepower, depending on the screen or display size, and to some extent colorimetry, although usually they're not going for color accuracy; they're trying to create an emotion or an ambiance.”

Bart Kresa, founder and master projectionist at BARTKRESA design in Los Angeles, CA specializes in large-scale environments. Kresa designed the system for a Halloween show that started recently at Universal Studios Japan that involves the projection of Raccoon City from “Resident Evil” (known as “Biohazard” in Japan) onto the lot’s recreation of New York City. “There are 81 Christie projectors projecting onto a building, wrapping around. You have a block and a half, basically, of image. It completely changes the stage. It really helped them to take people into a different space; it looks real.”

He continued, “I think 95 percent of our work now is with Christie projectors. We have a very good relationship with the company; I love their gear, it's top notch. We get a lot of support from the company.”

Another project at the Universal Japan lot, a live version of an anime entitled “One Peace”, exemplified the challenges that can face Kresa’s company. “We mapped the stage, but the surface of the stage is made out of over 600, I think, sheets of metal that are colored dark green and brown, and some of them are black. We had to put a lot of light on it, and then that worked against us because we had a certain budget. The challenge for the show was, how could we create something that works for the show that works for the budget.”

Indeed, the balance between lumens and dollars is central to any projection mapping project, it seems. “The biggest issue is reconciling the designer's creative wishes with the producer's dollars,” commented Weisberg. “That's probably where we spend the greatest part of our time on any of these projects.”

According to Weisberg, the designer’s vision might cost anywhere from four to 10 times the available budget, in his experience. Happily, “Projectors these days are smaller, quieter, more powerful than they've ever been. That actually makes it a little bit simpler.”

Even when the technical specification can be brought in on budget, a show’s success can present a challenge as its run lengthens, commented Weisberg. “The issue is that the show has been installed and programmed using a particular software application running on a particular hardware using particular operating system. If that hardware is no longer available, and that operating system is no longer being supported, then if you need to replace the systems you've got a show that's been programmed on a package that was produced six years ago and you don't know that it's going to run on the package that's being produced now; that becomes the issue.”

Looking to the future, “What we're concentrating on most right now is alternative forms of illumination,” said Collins, in terms of both brightness and cost of ownership. “I've never met a customer yet that's thrilled about buying a new lamp. So the longer we can make them last the better it is for everybody.” Customers can also look forward to improvements in long- and short-throw lenses and projector electronics, he added.