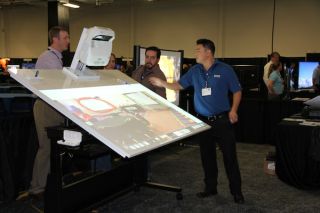 AV has always been a numbers game, crunching pixels, channels, and lumens to add up to an optimal user experience. But there are new numbers to analyze in recent years, quantities connected with the advanced mathematics of ROI, TCO, UHD, and the massive bandwidth required to transform that alphabet soup into a meaningful result.

To help its customers catch the digital signage wave, Almo emphasizes training and certification in the technology, and EVP and COO Sam Taylor has some business advice on the topic as well. "We tend to suggest that integrators find a niche in digital signage based on their existing clients and specialties," he elucidated. "It's a lot different doing menu boards for quick service restaurants than wayfinding and promotion for hospitality."

Taylor pointed out that many Almo customers are going back to corporate clients and speaking with HR about enhancing corporate communications via digital signage. Meanwhile, others who focus solely on banking clients are expanding their offerings there.

To help with that expansion, Taylor said, "Our focus has always been the same. We have 35 key vendor partners. We're very selective. We look at adding new vendors when they're going to solve a problem for our customers." Almo backs that curatorial aspect up with 24 sales people, a majority of which are CTS certified, and six business development managers overseeing specific technologies and vertical markets.

Now in its fourth year on the road with the E4 event, Almo enhanced its show floor with demonstrations of how its vendors can come together to be greater than a sum of their parts. A video wall setup comprised of Premier Mounts, NEC displays, and Hiperwall processing was a prime example of the distributor's emphasis on "solutions". Other exhibitors provided real-world application demos, including Samsung with its Samsung School platform, which integrates tablets and large-format displays with educational content provided by partners HMH and Pearson, in addition to allowing teachers to create their own content.

All over the floor, there was glorious 4K content provided by Moving Murals. The company has an emphasis on artistic material, and the result of its collaboration with display manufacturers was stunning. "4K is like living print," observed Moving Murals chief procurement officer Clayton Price, who was an instructor and panelist at the event. "If a photograph can move you, then 5,760 of them stitched together can as well. That's a big thing when you're trying to impress clients in certain markets."

Speaking with Price, I found hope not only for better 4K content creation, but greater collaboration between manufacturers in "delivering a better viewer experience," as he described it. "We need to do a better job of talking to hardware companies about what content creators need," he pointed out. "And integrators need to find out how to take existing hardware and existing content to give clients the experience they deserve."

On the audio side, a new Almo partner was at E4. Harman Pro showed its wares, and Greg Elwell of Harman rep Sigmet noted that the opportunities afforded by this new partnership "seem endless." He added, "We're looking to address some of the market we can't address directly with Almo's access to a broad market of contractors."

For Almo's part, Taylor identified several areas of growth in 2013, including large-format displays and video walls, houses of worship, and higher education applications. He also noted increased demand for mounting solutions and control options. The latter of these categories appears to be expanding into the collaboration realm via projector manufacturers such as Barco, which placed emphasis on its ClickShare offerings and simplified remotes at the show. At the press of one button on the projector remote and then one button on the ClickShare USB interface, presenters send content to the screen.

Barco also provided an embargoed preview of a new offering it will announce next Thursday, November 21. Production units are already on the truck and heading toward Almo now. So watch for news on this market-expanding option.