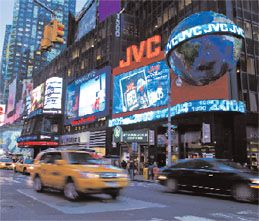 JVC LED at Times Square. meets all the criteria for a true 720p high-definition display. To further ensure a crisp image, pixel pitch — or the space between pixels of the same color — is a mere 8mm.

The main high-definition LED screen measures 19’ x 34’, and features a 16:9 widescreen aspect ratio. A new 71-foot LED ticker runs beneath the display and curves below the base of the JVC globe, which is encircled by its own 45-foot LED ticker. The JVC globe itself, a widely recognized fixture at the northeast corner of Broadway and 43rd Street since 1999, has been refurbished using high-density fluorescent paint.

“Times Square might have changed a bit in the 30 years that JVC has had a presence there, but it continues to live up to its nickname as the ‘crossroads of the world’,” said Karl Bearnarth, senior vice president, marketing, JVC Company of America. “For many of the millions of visitors that pass through the area every year, the bright lights and billboards are a main attraction. We think our new high definition billboard will create plenty of excitement thanks to its stunning resolution and our creative use of all three LED display areas.”

The new JVC billboard, called a “spectacular” in industry parlance, was created for JVC by Clear Channel Spectacolor, with the LED displays provided by D3 LED.

“In rebranding their long standing Times Square display, JVC employed the same qualities that have made it a leader in the development of sophisticated audio and video products — innovation, quality and a commitment to the consumer experience,” said Harry Coghlan, president and general manager, Clear Channel Spectacolor. “The JVC display is a true ‘spectacular’ in that it delivers grand brand heraldry, an iconic centerpiece with the JVC Globe, state-of-the-art technology, and engaging viewer content. In terms of Times Square displays the JVC display is ‘The Perfect Experience’.”

JVC will showcase seasonal, promotional and product-related original content on the new billboard. To kick off the introduction, JVC began showcasing content related to an upcoming promotion, along with promotional messages for its camcorders, high-definition displays and car entertainment products.