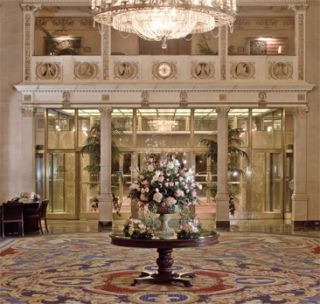 BOSTON, MA—Because it has retained the charm and luxury of its Roaring Twenties heritage, The Boston Park Plaza Hotel and Towers was inducted as a member of the prestigious Historic Hotels of America. In addition to its upscale accommodations, the Park Plaza is well known for its six ballrooms: the very large Imperial and Plaza ballrooms, and the smaller (but still large by hotel standards) Georgian, Arlington, Berkeley, and Clarendon ballrooms. The Park Plaza is thus a prized location for meetings and parties of all kinds.

But behind the scenes, the hotel was growing increasingly frustrated with the audio system that served the ballrooms. At its root, there was no core control, time alignment, equalization, or limiting. Audio/video integrator Balanced Input of North Attleboro, MA helped “green” the Park Plaza by replacing the old 96-space rack system with a much smaller system centered on energy conservation.

The audio system that was giving the hotel so much dissatisfaction was installed in 1996. Mark Waker, principal at Balanced Input, consulted with the hotel and offered a plan for a system that would give them ease of operation, while giving them a substantial energy savings. “The bones of the system were quite good, EAW boxes and Electro-Voice ceiling speakers, some tweeters needed, but nothing major,” Waker admitted, “but most of the amps had issues and the processing was simply missing. I knew we could save the speakers, but the system desperately needed modern control and amplification to deliver.”

The hotel is configured such that there is one equipment closet for the two larger ballrooms and a second equipment closet for the remaining four smaller ballrooms. Each of the closets contained a seven-foot, 48-space rack. Between them, 10 amplifiers powered the speakers. “The fact is, these systems idle most of the time,” Waker said. “They don’t do much most of the day, but then when they have to work, well, they have to work! At any rate, they spend most of their time using energy to make heat, which the building’s A/C system then has to use energy to cool down. With power-hungry amps in there, it was a big waste.”

To each of the replacement racks Waker added an Ashly ne24.24M Protea DSP, “fully loaded” with modular expansion cards to offer a tremendous amount of processing power within two rack spaces. Each of the larger ballrooms received an Ashly ne8250 eight-channel power amp, whereas one ne8250 served all four of the smaller ballrooms. In addition, mp3 players and power conditioners added features that were absent from the older system. Despite this, the rack size for the larger ballrooms shrank from 48 spaces to just 20. Even more impressive, the rack size for the smaller ballrooms shrank from 48 spaces to just eight.

“Ashly amplifiers are ‘energy savers,’ but unlike most other ‘energy savers,’ they actually sound good,” Waker said. “We wouldn’t use them if they didn’t. In fact, we use Ashly PE Series amps and Ashly Protea processors in our live rig. In addition, Ashly products are resolutely reliable, which greatly reduces service calls—a benefit to both the hotel and us, as getting into Boston is no picnic. All that power and reliability comes with a very reasonable price tag. In fact, they helped us to come in below the figure that the hotel had budgeted for, so we helped the hotel spend that money on LED lighting.”

The old systems used to draw in excess of three amps while idling, more in the case of the bigger system. The new systems each draw less than one amp while idling. That represents a conservatively estimated 60 percent reduction in power consumption, not even considering the lower load placed on the A/C system. In addition, with Ashly processing, any hotel staff member can use the system. “They just plug in a mixer or a mic, and clean audio comes out, no feedback, no fuss,” Waker said. “We also installed Ashly wall remotes so that banquet staff can adjust levels without needing to call a tech.”