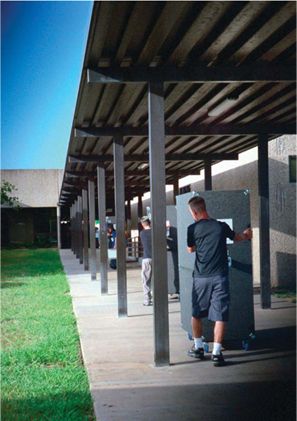 Portable church gear, hauled to and from the location in a trailer, truck, or fleet of small vehicles, must ideally meet a variety of criteria: compact, lightweight yet powerful, quick to set up, and easy to operate. car dealerships...the list goes on. These new church plants, multi-site expansions and transitory locations all have one thing in common, namely a requirement for all the amenities of a permanent church building, from the AV and lighting systems through coffeemakers and even toys for the nursery.

According to Pete van der Harst, founder, owner, and CEO of Portable Church Industries (PCI) in Troy, MI, “To the best of our knowledge, approximately six percent of the churches in North America are portable. That’s a backwards-engineered statistic; every magazine that specializes in the church world almost always states that 94 percent of readers have buildings.” Based on his own experience, he said, “I’d say that’s as good a number as you’re going to find.”

Published figures suggest that there could be as many as 400,000 churches in North America, of which about 24,000 might therefore be expected to be portable. Meeting in temporary digs each weekend, and in some instances even at different locations during the week, portable churches have specific needs when it comes to audio, visual, and lighting equipment. The gear, hauled to and from the location in a trailer, truck, or fleet of small vehicles, or perhaps stored in a convenient place nearby, ust ideally meet a variety of criteria: compact, lightweight yet powerful, quick to set up, and easy to operate.

“Church sound guys and technical people have to have systems that go up quickly and that set up with the minimum of patching and reconfiguring,” confirmed Dan Craik, houses of worship marketing manager, Yamaha Commercial Audio. “We’re heading into the digital age very quickly, with churches embracing that technology. Any system that has last Sunday’s service in its memory and can recall it at the push of a button is at a real advantage. Plus the fact that a digital console probably is 70 percent less weight and half the footprint of carrying around an equivalent analog console.” In addition, interconnects between the stage and the console and to the speaker processor are typically single Cat-5 cables.

“What we try to do is create a rolling, permanent install,” explained PCI’s van der Harst. “That’s our niche.” As the company name indicates, PCI specializes in equipment tailored to the portable church market. In fact, the company goes far beyond supplying appropriate AV and lighting packages to also offer staging and all the accoutrements expected of a church, including nursery equipment, housed in convenient rollaround storage cases designed to fit neatly into a trailer. The goal is to be able to roll everything in and get the essential equipment in place and set up as quickly as possible. A video o PCI’s website demonstrates a typical system, with a stage and backdrop, going from trailer to fully operational in less than 17 minutes.

PCI sells Renkus-Heinz equipment and other brands into the portable church market around the country. The company, established in 1994, has been involved with more than 1,000 churches in 47 states, according to van der Harst, who said that the portable church market is rather specialized. “The skill set for doing this is very different from the touring and permanent install industries. Doing portable churches can be cumbersome. We make it a priority to design equipment around the time and skill sets available.”

Plenty of churches recognize the many employ fulltime technical staff. “My own church, that I was involved with launching in 1990, today has three portable campuses and one fixed site. They have a video staff of a half-dozen, an audio staff of at least a half-dozen, they have portability directors for each of the campuses, and lighting staff. You’re probably talking 25-plus employees involved in the technology and the arts. That has become normal,” van der Harst said.

As media director at East Cooper Baptist Church in Mt. Pleasant, SC, Marc Collins is only too aware of what it takes to set up and operate a portable system each week. Collins and 30 volunteers prepare the gym at a school adjacent to the church on Saturday night. The setup, featuring a 30-foot x 20-foot stage for a contemporary band, allows multiple Sunday services to be held in quick succession.

The Peavey Versarray, comprising five 112 line arrays and two 218 Subwoofers per side, are flown on twin Vermette lifts and stored in a corner of the gym when not in use, along with powered monitors, an Allen & Heath analog console, and other gear. “We get everything up in about an hour,” Collins reported. “The thing I like about the Versarray system is it can do so much. And it’s been rock solid from day one.”

Collins also shoots video of the traditional church service and feeds it via a Grass Valley machine—”like a $10,000 TiVo”—to a 12-foot x 12-foot screen and Christie projector in the gym. A musician who spent 13 years onstage at the Carolina Opry, Collins said, “My forte is the studio, but I knew enough about both audio and video to make it happen in this job.”

Church technology requirements have exploded, van der Harst said. “Some of these systems are complicated enough that you start tuning them on Tuesday morning to get them ready for the weekend. But portable systems do tend to be a little simpler.”

In terms of consoles, for example, “We are seeing a rush toward digital consoles.” Then, he cited several Yamaha consoles that have gained popularity in the worship market. “It’s common to have a PM1D at the campus and an M7CL in the portable system. A lot of LS9s are going in that are volunteer run.”

In his experience, he said, “Most portable systems don’t exceed 1,200 seats. A gymnasium at the local high school has about 1,500 seats.”

Portable equipment budgets represent a different order of magnitude to construction costs, which can be staggering, he said, citing one example that cost $9 million for a 300- person sanctuary. “That’s tens of thousands of dollars per seat. In our world, we are way under $1,000 per seat, and many of our mid-sized churches are under $500 a seat.”