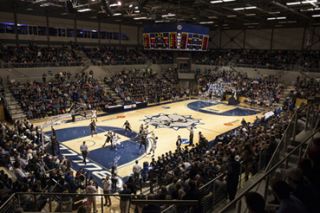 AVL Systems Design, LLC, a design-build firm located in Edmond, OK, supplied and installed the QSC Audio equipment as part of an integrated audio, video and control system at the venue. “We installed 48 of the WideLine WL2082-i arrays,” said Marc Pierce, president, AVL Systems Design. The line arrays are installed in six hangs of eight cabinets each. Two arrays are flown along each long side of the arena plus one at either end. Four GP218-sw dual-18-inch subwoofers are positioned above the scoreboard at center court. A total of four PL340 and eight PL380 two-channel amplifiers power the QSC loudspeakers.

“The QSC system is very efficient—that was one of the main cost-saving benefits of a QSC solution,” said Pierce. He reports that he recommended QSC equipment to the client in preference to products from another manufacturer. “While there were some cost savings in choosing QSC, it wasn’t something we went after because of the cost savings—it was for overall better performance. QSC has a better product.”

The Q-Sys Core 250i and I/O Frames, located in a machine room next to the control booth along with four PL340 and eight PL380 two-channel amplifiers and other equipment, handle audio distribution and processing throughout the building. “All of the audio goes in and out of the Q-Sys Core for the main PA, the distributed audio around the perimeter of the arena, some outdoor speakers around the perimeter of the building and a couple of conference rooms,” said Pierce.

The scalability of Q-Sys further enables the university to expand the platform into other areas of the campus. “They’re going to be adding some facilities in the future. That’s another reason why we chose the Q-Sys Core, as it allows us to easily expand,” said Pierce.

The facility, which also includes new locker rooms, coaches’ offices, a film room, training room and various multifunctional rooms, plus a VIP suite, provides a home for the university’s men's and women's basketball teams and women's volleyball squad and provides additional amenities during games at the adjacent football complex.

Although the official opening was late March of this year, the center has been in operation since January, providing plenty of opportunities for event attendees to experience the new QSC sound system. The first major act to visit the center was comedian Bill Cosby, as part of Comedy Central’s Far From Finished Tour, on April 3. “People here have been extremely ecstatic about the new system,” says Pierce. “The clients say that the speech intelligibility and the coverage are even more than they had hoped for. Everybody is very pleased.”

The Pioneer Cellular Event Center, jointly funded by students, the community and the university, is expected to attract over 25,000 visitors annually through its program of athletics, tournaments, conferences, trade shows, and entertainment events.