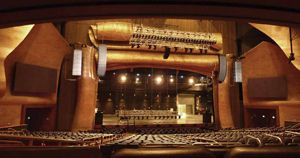 MGM Grand On The East Coast Gets A Facelift

MASHANTUCKET, CT—The Foxwoods Casino Complex, the biggest casino complex in the USA, is located on the Mashantucket Pequot Indian Reservation in Connecticut. “This is the largest casino in the U.S., covering approximately one square mile, and it’s our responsibility to define and install all audio, video, and lighting requirements,” noted Jeff Mele of system integrators North American Theatrix (NAT).

Within this massive complex you will find the MGM Grand Theatre: a 4,000-seat venue with a 60- by 30-foot-high proscenium arch. NAT was charged with the task of installing a suitable PA, for which they selected a d&b audiotechnik system. “The decision to install d&b was easy for us,” Mele explained. “d&b systems represent the cutting edge in audio performance technology and that is what we wanted.”

Steve Gamelin, lead audio engineer at Foxwoods was equally forthright, “It was a ground-up new construction venue. We wanted an upscale venue throughout. The system had to have rider and touring engineer acceptance. While there are many systems with rider acceptance, most are now considered ‘older’ technology whereas d&b seemed to have something very new and different going on. Although it was our decision to use d&b, NAT was instrumental in making this happen. We collaborated with NAT and d&b who then worked together to provide us with what we felt we needed in order to be a first-class venue.”

This was NAT’s first installation using d&b, but Mele is happy to justify the choice, “The room is completely contoured; there are no right angles or perfectly flat surfaces anywhere. At the same time there is little absorption material in view requiring a system the can truly manage not only typical hi-mid frequency dispersion but extreme control over both low-mid and sub frequencies. The d&b D12 amplifiers were proven technology and we already had experience using them as we’ve been hosting d&b training sessions and audio consultant demonstrations since 2001. And of course we’d worked with and got to know Colin Beveridge, d&b’s U.S. company president, so all the fundamentals of confidence were in place.”

The PA is primarily a J-Series system with Q-Series loudspeakers for a central vocal cluster, but careful thought was required to overcome the room’s acoustic difficulties. “The room is relatively narrow for such a large audience, and in the back, beneath the balcony, we had some problems,” Mele recalled. “We used a range of fills—d&b E3s for the front row stalls while the wide Q-Series loudspeakers above more than adequately covered the front rows. We installed d&b’s new E8 for under-balcony fill, with the E12 over the balcony. Colin Beveridge gave us the opportunity to experiment with these new boxes, and as a distributed ‘fill’ system they marry really well. The images join to present one single image. They are amazing.”

Also supporting the system are an Avid VENUE, Yamaha PM5D, and a Midas analog console. Intermediate processing used was Lake for the house and Electro-Voice Helix for the monitors. The microphone collection consists of mainstays from Shure, Sennheiser, Audio-Technica, and AKG, to an esoteric stock of Neumann, Royer, and AMT. System alignment is a Smaart/Earthworks setup.