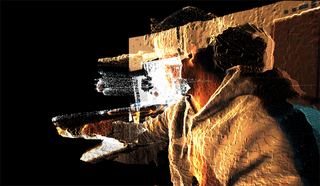 From October 6 through 8, Montréal will host a festival dedicated to video mapping. With the support of numerous internationally acclaimed creative studios from Montréal, the first edition of MAPP_MTL will emerge at the convergence points of Montréal’s renowned Mile End and Mile-Ex neighborhoods, proposing circuits of both exterior and interior installations, exploring as an open laboratory—a vision of the future of video mapping.

“Mapping is a fascinating medium that uses video projection to reinvent spaces,” said Thien Vu Dang, co-founder and artistic director of MAPP_MTL. “It’s a form of art that is gaining more and more notoriety, but still has plenty of untapped potential.

“The festival brings life to a number of structures throughout Mile End and allows the public to reclaim their neighborhoods, see the environment through new eyes, and completely reinvent the spaces. MAPP_MTL hopes to propel Montréal to the forefront of creative thinkers in video mapping and bring attention to a new generation of artists with a mastery in both art and technology.”

With an eclectic and inspiring program, the first MAPP_MTL invites local and international artists to participate in a creative event that paves the way for meetings and exchanges among creative minds that inspire reflection and discussion on the many uses and applications of video mapping.

Among the festival guests are VJ Suave (Brazil), Philippe Dubost (France), Delphine Dussoubs (France), and Rémi Vincent (France), as well as Jean-Sébastien Baillat (Canada) and Studio Christie 360 (Canada). They will share the stage at MAPP_MTL events. Here are the details:

MAPP_MTL will present within the Never Apart 2016 autumn exposition a Jean-Sebastien Baillat and Philippe Dubost installation, redefining the mapping limits and applications, thus questioning the position of the medium in the galleries and art world.

Minutes Mapping is a central piece of MAPP_MTL, inviting creators to propose an idea in the form of a 60-second video projected on an unconventional surface. During the Minutes Mapping party, the public will contemplate the original propositions projected on a fascinating structure: the human body.

The Brazilian duo, VJ Suave, had the beautiful idea of putting a projector on a tricycle and presenting their playful animation on the walls of their city. Ygor Marotta and Ceci Soloaga see the city as their playground, where they use urban facades as canvases for their nighttime creations.

VJ Suave’s playful, poetic animations aim to touch a wide public. They trace streets and alleys on tricycles equipped with projection equipment through public spaces. This unique interaction between artist and the street itself renders their art accessible to all, inventing moments of imagination and collective amazement.

For less than a year, the space under the Van Horne Viaduct in the Mile End has become an emblematic place of the neighborhood. MAPP_MTL will establish here the center of its outdoor activities with projections on the 1 Van Horne (famous St. Lawrence warehouse), under the viaduct on the long wall of Millions Tapis et Tuiles. Montréal Christie 360 et Normal studios will transform the area while Tupi collective and A-Rock DJ will make the public shake on the open air dance floor.

MAPP_MTL, in collaboration with Mutek, has designed a night of electronic music and live projections to close the festival in a symphony of grooves and audiovisual glory, at Moment Factory. Come celebrate the conclusion of this first edition of Montréal’s International Festival of Mapping. Featuring visual talents Delphine Dussoubs, Diagraf, thisisnotdesign, Jean-sébastien Baillat, and musical performances from Softcoresoft, Stefan Jós, Magnanime, and Flabbergast.