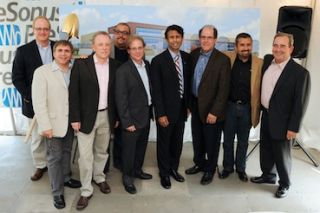 Louisiana Governor Bobby Jindal led the list of guests of honor at the groundbreaking ceremony for PreSonus' new high-tech headquarters, attending in recognition of PreSonus' contributions to the state and local economy.

Louisiana Governor Bobby Jindal led the list of guests of honor, attending in recognition of PreSonus' contributions to the state and local economy.

A manufacturer of digital and analog hardware and integrated software systems for the professional audio market, PreSonus has expanded from 49 employees in 2009 to more than 130 employees worldwide, including the 80 full-time employees who are overflowing its current offices on Florida Boulevard.

According to PreSonus CEO Jim Mack, PreSonus has grown its revenues by more than 50 percent last year and is slated to enter new product categories to continue its growth.

Designed by local architects Ritter Maher, LLC, and developed by Moniotte Investments, the new 44,000-square-foot building-located at 19151 Highland Road-will cost approximately $8.3 million including land and development. Completion is expected in the late summer of 2013. It will accommodate at least 125 employees-crucial because PreSonus is continuing to grow and hire-and offers many amenities that are not available in the company's current space.

PreSonus’ rapid growth, local hiring, and emphasis on digital engineering qualified it for LED Digital Interactive Media and Software Development tax-credits. This program supports the creation of quality digital-engineering jobs that stay in the Baton Rouge community. Historically, companies like PreSonus have usually located on the East or West Coast. However, the tax-credit program has helped make it possible for PreSonus to grow and prosper in its home city, investing these funds in new engineering staff and in research and development. Many of the new hires are highly skilled digital-hardware and software engineers residing in the Baton Rouge area.