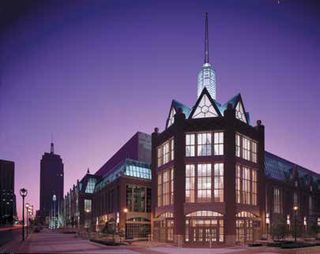 Networking technology in professional AV has come a long way since the Wisconsin Center opened its doors to conferences, expositions, and special events in 1998. Though technically advanced at its time, the limitations of the downtown Milwaukee venue truly came to surface as the venue’s private holding company, the Wisconsin Center District, laid groundwork for expansion plans that will eventually double the facility’s space.

The Wisconsin Center in downtown Milwaukee recently completed an expansion that doubled the size of the facility. As part of this expansion, Metro Sound and Video had to improve the connectivity and communications throughout the entire building. To effectively prepare for such expansion, the Wisconsin Center District first needed to improve connectivity and communications across the nearly 190,000 square feet of exhibit space and an adjoining 37,500-square-foot ballroom.

The IT director at Wisconsin Center District tracked down Keith Anderson, director of operations at New Berlin, WI-based Metro Sound and Video, to evaluate options to improve venue-wide audio connectivity. Anderson was familiar with the initial site design through a former employer, and acutely aware of its limitations. Those memories came flooding back once he got a look at the original design drawings.

“The main Expo Hall comprises four very large rooms with a giant concrete floor, a large three-space ballroom for more formal events, and a series of smaller meeting rooms that can be combined as needed,” said Anderson. “We needed to create a unified system where all of these rooms could talk to each other—or not to talk to each other—without requiring an inordinate amount of reconfiguration. As we dug through the old prints, we discovered a number of discrepancies between the original plans and the actual implementation that made us wonder how they even supported meetings over this system.

“This job was as much about preventative maintenance as it was about setting up for the future,” he continued. “While we used some of the existing technology, we really needed to start from scratch—and we had a month to get it done.”

The Metro Sound and Video team focused on the design and implementation of a digital audio network to support venue-wide, multichannel transport with zoned capability.

“The Dante network basically accommodates the same processing chain for every part of the facility,” said Anderson. “Each room feeds an auto mixer with local microphone jacks; that audio flow is them moved to a combining system. We also have a separate matrix outside of the combining systems that allow the user to recall dedicated presets.”

Anderson adds that the system also accommodates remote recording for ballroom events. In these applications, the user can send event audio from the ballroom to a separate recording room, where users can connect recording equipment to the dedicated matrix.