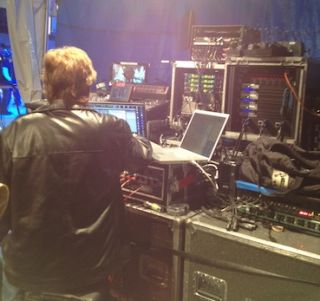 Last night, millions of television viewers were treated again to a spectacle that aligns living rooms nationwide for one moment: the lighting of the Christmas tree at Rockefeller Center in midtown Manhattan.

A giant 76-foot-tall Norway spruce was at the center of holiday cheer, with the lighting capping a ceremony that used to last 30 minutes and now stretches over two hours of NBC television airtime.

This was the first year that PRG loaded in the VUE al-4 line array for the tree lighting, and “it went it beautifully,” enthused Dave Chessman, PRG system designer, project manager, and the Riedel RockNet fiber technician on the day of the tree lighting. “There are serious noise restrictions around Rockefeller Center,” he explained, and the VUE line array controlled the audio dispersion well.

PRG made the switch to line arrays for the event approximately ten years ago, “and it’s made a big difference because of the improved focus,” observed Rendon. “Sound used to bounce around. I mean, we’re dealing with 12 solid blocks of granite buildings and the giant echo chamber down on the rink.”

RockNet has been in use at the tree lighting for several years, and all the sound pros were enthusiastic about how much time it saved during load-in and load-out. “We used to be packing up trucks at dawn, now we’ll be out of here a little after midnight,” noted Bruce Cameron, audio lead for PRG.

Amp racks and FOH areas were both housed in tents under the tree. “It’s funny, the most out of the way place to put us is directly under the tree,” Rendon said.

The weather this year was unusually mild, with temperatures in the 50s. It was a nice change of pace for the audio crew. “We’ve done this show with it snowing sideways,” Rendon said.

Mild weather was a welcome relief to the crew, who were all working in a more somber state this year following the tragic loss of NBC Today show audio technician Jim Lovell, who had worked the tree lighting event for nearly 20 years. Lovell was one of four victims of the MTA train derailment on Sunday, December 1. He was traveling into the city to help with the Rockefeller setup.

“He was always the happiest guy, and he was always one of the first people here,” said Cameron. “We knew something was wrong when he wasn’t here by 8:00 a.m.”

Lovell is survived by his wife and four children, and a community fund has been established to help his family. Contributions can be made here.

Lovell’s memory was everywhere in mind during the tree lighting setup and ceremony, and a special memorial tribute was made to him in the NBC production credits.