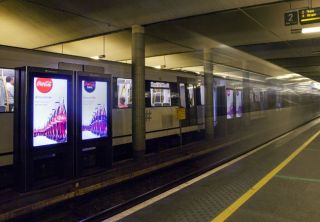 Clear Channel changed to Matrox Maevex Encoders and Decoders because of their ability to offer remote video and audio extension at user-defined bitrates between 100Kbps and 25Mbps, enabling multiple streams on both 100Mb and 1000Mb standard networks.

Using Matrox PowerStream software, Clear Channel can oversee and manage each encoder and decoder. Content is created with Mermaid digital signage software and placed onto a PC player in the remote operations center. Maevex AV-over-IP platform captures, encodes, and streams the signal for decode and display on remote digital signage screens within each metro location.

“We feel very strongly that the solutions Matrox produces cannot be compared to home office or consumer products and meet a high grade of industrial standard. Matrox products are built to last,” said Jonas Michael, Head of Digital Development and Operations at Clear Channel Norway.

Clear Channel also has plans to use its setup in an additional seven stations and have integrated Maevex hardware and PowerStream software on three Oslo Ferries passenger ships and are in the process of adding it to six airports across the country.