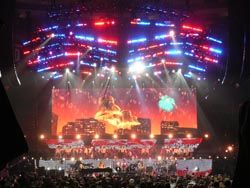 Elton John in Germany with grandMAs.When Elton John performed his gig on the horse racetrack in Iffezheim, Germany during his current European Tour, 13,000 present fans enjoyed a selection of 23 Top-40 hits, 15 Top-10 singles and five #1 hits. Furthermore the artist played songs from his new CD "The Captain & The Kid," the 44th album of his decade long career. This album is a sequel to the album "Captain Fantastic and the Brown Dirt Cowboy" from the year 1975. It broaches the issue of Elton John's and his songwriters Bernie Taupin's history. The concert was the only show in Germany that the artist played during his current worldwide tour. Lighting designer and director Kevin "Stick" Bye uses for the tour two grandMA full-size, one as backup.

The Co-Designer of the show is Benny Kirkham who also is responsible for the media server content. Demfis Fyssicopulous and Benny Kirkham work as grandMA programmers. For more information visit www.actlighting.com.