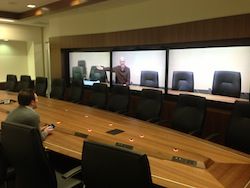 Prepare for new paradigms. That’s the watchword more than ever in AV, and it’s a philosophy that helped an alert AV consultant recognize a game-changing project when it crossed his desk.

The journey to an evolved design—one where cloud-based systems take on unprecedented levels of functionality—began in Q3 of 2011 for Joey G. D'Angelo, vice president of the San Francisco, CA-based AV consultant firm Charles. M. Salter Associates. That's when he was asked to consult on a new campus that was being built for a large Silicon Valley networking company, one which would feature more than 350 conference rooms, multiple video walls, and an executive briefing center.

Its scope was ambitious, but the project was also spiraling out of control in terms of cost and complexity, while still failing to meet the basic goals and expectations of the company’s CTO. "Despite receiving the best practices and best systems possible from their previous integrations," said D'Angelo, "this networking company was unhappy with the status quo of the AV industry. For this new campus, they wanted to drive down prices, increase quality, and also increase the overall user experience."

D'Angelo, whose firm worked closely with integrator AVI-SPL throughout the project, was taking on a tall order. Among the client's top priorities were that the expansive campus offer simplified systems, with no more than three button pushes to presenting. As well it had to provide a unique videoconferencing experience—one that offered an immersive feel, for 1/10th the cost of telepresence-style systems.

To cut video teleconferencing costs and complexity, D'Angelo first honed in on the traditional set up of two displays and multiple inputs, which required a costly proprietary matrix switcher. Instead of that typical system, D'Angelo began to imagine a workflow where all the routing was fully networked, controlled completely through the network with iPads as the front end, on an architecture that could be applied campus-wide for a cost of less than half the original budget.

The gestalt that allowed D'Angelo to take things in a new direction came when he remembered a demo he'd seen for the SVSi Networked AV digital media distribution and switching system that had originally been presented to him as a digital signage solution. But with the SVSi encoders' ability to encode and distribute sources of almost any format onto an existing IP network, and then make that stream available to any endpoint in the facility by means of the SVSi’s decoders, D'Angelo realized he could use them for something much bigger than just signage.

With SVSi’s technology at the heart of the system, D'Angelo now had a platform that allowed him to not only distribute AV anywhere on the network, but to share essential hardware devices via the cloud. “Instead of using a switcher, this approach uses standard networking protocols and hardware to do all of the control and routing of the media in the system," he said. "This way, you can share devices between meeting spaces. For example, instead of putting a codec or an echo canceler in a rack within a conference room, you can put one in the central location—and just use the network to virtually teleport the box into the room where it's needed, and it's there.”

Myriad efficiencies unfolded from there. No IR, RS-232, or contact closures whatsoever are required in the system—the entire control system is networked, meaning D’Angelo and his team could use a single processor to control multiple rooms. As a result, the entire campus requires only 80 or so processors controlling more than 360 individual systems. In addition, there are no matrix switchers anywhere on the campus, with the media from one laptop plugged into one room capable of being routed to every display on the campus or globally, for that matter.

“This is probably the world’s largest AV matrix, comprising upwards of 1,000 sources by 1,000 endpoints,” said D’Angelo. No proprietary cabling was required, nor was there any cable termination—all connectors and cables are off-the-shelf or plug-and-play.

With the heavy reliance on networking technology, network centric thinking had to be employed and typically foreign concepts such as load sharing and failover had to be incorporated into the system's architecture.

Aiding all those iPads controlling the systems was a power over ethernet (POE) to USB charger developed by FSR specifically for the project. “They just have to drop their network cable, and the iPads get their power from the network,” D’Angelo noted. “The alternative would have been a complicated electrical design—this POE to USB innovation provided $750,000 in savings right there.”

But it wasn't all about circuitry on this campus—good old-fashioned carpentry also came into play. A custom table was created to meet the remit of a more immersive video teleconferencing experience.

“We’ve found that more useful videoconferences are smaller—if you try and fit 12 people onto the screen, they all look like they’re the size of a postage stamp,” said D’Angelo. “We call what we provided ‘semi-presence.’ We did that by getting the plywood out and experimenting with different table shapes and distances from the camera. We saw that fish-eye set in at about 75 degrees, so we went about finding how many people would fit in so you can usefully see people across the table, and the number we arrived at is five. During a video teleconference, it looks like you’re sitting across the table from them. Now this company is making those exact tables, along with the monitors and cameras we specified, the standard globally.”

Besides the immense satisfaction of meeting his client’s demanding agenda, Joey D’Angelo sees big-picture excitement in the completion of the networking company’s campus: flexibility, redundancy, expandability, and serious cost savings are all inherent in the system design, as is a deeper evolution of AV in the cloud.

“Charles. M. Salter Associates has utilized this architecture on five projects since this particular campus, with more on the way,” D’Angelo said of the install. “It’s so flexible, with so many possibilities for how it can distribute and route. We’re only scratching the surface.”