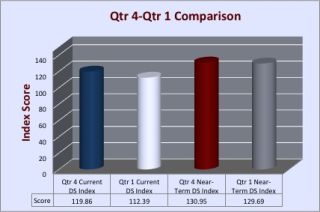 "As the economy ratcheted down late in the first quarter of 2012, the Current DS Index similarly declined," said Steven Keith Platt, Director and Research Fellow. "The industry can generally be viewed as still growing, as the Current DS Index remains over 100. The rate of growth did, however, slow significantly in the first quarter of 2012. As we expect a continuing weak economy during the second quarter (GDP in the range of 1.4 to 1.6), we anticipate that the industry will similarly experience another slowing in activity."

The complete Q2 2012 PRI-DSF North American Digital Signage Index is available for $95 from the PRI Resource Library. The report includes 37 charts and graphs, and commentary about industry trends. Current members of the Digital Signage Federation receive the Index as a membership benefit through an affiliation between PRI and the DSF.