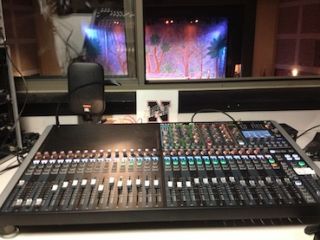 After 15 years, the limitations of the center’s original live sound console were becoming all too apparent, prompting an upgrade to a Harman Soundcraft Si Performer 3 32-channel digital console with built-in DMX lighting control.

The school wanted to make the move from an analog to a digital console, but more importantly, it needed many more inputs than the previous console could provide.

“Over the years we’ve grown to where we use 20 wireless microphones, plus area microphones for the chorus and more for our larger musical productions—and by the time we’d get to miking the pit band we had run out of inputs,” said Michael Frank, Performing Arts Center Director at “The Max.” “We would have to patch in a second mixing board for the pit band, fed into an input of the main console. This got ugly as we couldn’t mix the individual instruments in the pit band the way we needed to for monitors and didn’t have enough control of the final mix.”

Michael also wanted a console that wouldn’t take up more space, since there was limited room in the auditorium’s control booth. After doing his homework, and working with Bob McLaughlin of local dealer Central Interconnect, Frank determined the Soundcraft Si Performer 3 digital live sound console was the best solution, used with a 32-input Soundcraft Compact Stagebox.

“I was impressed by what the Si Performer 3 offered for the price,” Frank said. “What you get for what you pay for is incredible.”

Frank set up the Si Performer 3 console in the control booth and the Compact Stagebox on the auditorium’s stage, using just two Cat5 cables to connect them together. This allows the wireless microphone receivers to be placed right next to him by the Si Performer 3 in case there’s an issue where he might have to swap out a mic channel, and the convenience of placing the Compact Stagebox right by the stage where additional mics can be easily connected.

The Soundcraft Si Performer 3 provided another benefit Frank hadn’t even considered at first. The console is so easy to use and understand that he’s now training students on how to use the console, to the point where they can run the show and Frank said he “doesn’t have to do anything but watch.”

“In fact, with the training they receive with me, six of my students have gone on to work with the local stagehands union and a number of them have gone on to college as Technical Theater Majors,” he added.

In particular, Michael and his students like the Si Performer 3’s FaderGlow color-coded faders, the ability to choose from 14 mix outs and the built-in DMX 512 lighting control. During smaller productions and lectures, just one person can handle both sound and lighting.