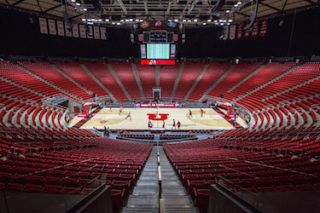 According to Poll Sound’s Deward Timothy, the first order of business with the renovation project involved the removal of the venue’s heavy steel and concrete cloud. “The Huntsman Center had a very large structural cloud that maxed out the weight limit on the roof and was not suitable for hanging technical lighting or sound, which made the venue unsuitable for concerts,” he said. “The idea with the remodel was to have the space divisible with a curtain system to create various sized smaller rooms, and to replace the cloud with a lighter-weight ‘super grid’ that could accommodate concert technical systems. Since the room would now be divided, it was important in the sound system design that it be able to support each section individually; in other words, coverage in the unused areas could be turned off at will.”

Using L-Acoustics’ Soundvision acoustical modeling software, the two firms collaborated on the design of a new loudspeaker setup to replace the arena’s previous vintage center cluster system, which had issues with hot spots and low intelligibility in many areas.

Installed late last year, the new system features two concentric rings of loudspeakers: eight main arrays of eight Kara flown beneath two SB18i subs addressing the lower bowl seating areas, and 16 delay arrays of three ARCS Focus enclosures collectively delivering a razor-sharp 45 degrees of coverage to the upper bowl seats. Four arrays of three ARCS Wide mounted under the scoreboard each provide a tightly focused 90-degree pattern to the basketball floor. All loudspeakers are powered and processed by a combination of seven LA8 and 21 LA4X amplified controllers housed in racks on a platform near the top of the dome with fiber runs to the mix position, where a computer running L-Acoustics’ LA Network Manager monitoring and control software is located.

“It would have been possible to cover both the upper and lower bowl areas by using larger arrays, but that would not have accomplished the zoning near as well,” said Spectrum’s Sarah Rollins. “One of their scenarios is to only cover quarter or half of the lower bowl. It is far more accurate to use a delay ring than to try to turn portions of the arrays on and off. Plus, we get better direct-to-reverberant levels having the speakers closer to the audience. The bulk of the system power and quality come from the main arrays with the delay ring adding fullness and intelligibility to the upper bowl.”

The arena is perfectly circular in shape, so all delay arrays are identical and equidistant from the audience. “Originally we had thought about using Kiva arrays for the delay ring,” Rollins said. “However, the Soundvision model showed us that the ARCS Focus would cover the area perfectly, and the fact that it nicely fit the budget was a plus. ARCS Focus was the right choice and is providing even, natural-sounding coverage to the upper bowl.”

Timothy recalled that his production department worked a Veterans Day concert using the new in-house system, only needing to augment the equipment for monitoring and front fill to produce localization to the stage. “The main reinforcement was the newly installed system, which was highly successful,” he said. “It’s not often that you find an arena system of such high quality. It covers well, is highly intelligible [measured STIPA of 0.79 in full-arena mode], has a substantial amount of acoustic power, and is of premium components. The versatility of the system with its zone-coverage capabilities is invaluable and the University has been very happy with it so far. In fact, they made it through the entire basketball season without a single audio complaint—only praise.”