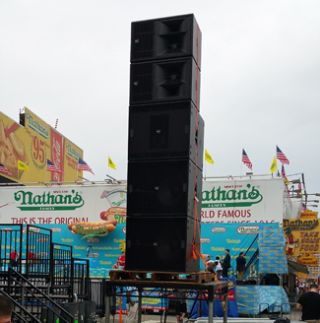 Whatever you do on the Fourth of July, it’s likely that tradition plays a big part. This month, if you were anywhere near a television or Coney Island in Brooklyn, NY, that tradition probably included the world-famous hot dog eating contest at Nathan’s Famous.

With thousands of people now gathering annually to witness what Nathan’s Famous describes as a “unique sporting event,” the contest now requires nothing short of a powerful sound system. This year, PLUSMUSIC and Audio Production Services, both New York-based companies, were on hand to supply one for this very American tradition. More than 30,000 people were reached with KV2 equipment.

Simon Nathan, president of Audio Production Services and brand manager at Italian Speaker Imports, has been the sound engineer at the hot dog eating contest for the last ten years. “We needed a system that was powerful enough to reach a massive, outdoor crowd, that was small enough to not be visually obtrusive for the ESPN broadcast,” he said. “KV2 was perfect for an outdoor event of this size, because you don’t need lots of it to get a big sound.”

Using an ES1.0 system for the main audience at the front of the stage, Nathan used an ES1.8 and ES2.6 on each side. Two front speakers were used, each an EX26, as well as an ESR215 on each side. For the delay system, the 47-year sound engineer veteran chose two ES1 speakers on top of two ES1.8 speaker and an ES2.5.

“It was so powerful,” said Nathan. “You can do a lot more than virtually any other sound system with a KV2 rig. It covers a tremendous size crowd. It’s a point-source system as opposed to a line array, but that single box has incredibly even and efficient coverage; the quality of the power was stunning. The other thing is, the event is held at a kind of a cross section, so the sound has to be projected in four different directions. I was amazed at how clean and clear the sound was, no matter where you were standing in that massive crowd.”

The sound system was also needed for far more than just announcements. Prior to the main event, during which the winning contestant ate a whopping 62 hot dogs, the audience was also treated to more than two hours of performances from local bands, singers, dance crews, and DJs from the New York City area.