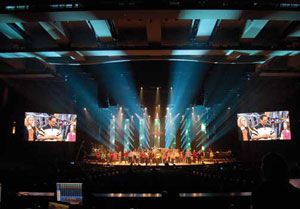 (Above) Willow Creek Church in South Barrington, IL was looking for an efficient means of distributing video throughout its 7,500-seat auditorium.
(Below) Willow Creek upgraded its RF-delivered signage using the Contemporary Research QMOD-HD HDTV Modulator. The facility also uses Contemporary Research’s QMOD-SDI to broadcast its service directly from the video system’s SDI feed.

SOUTH BARRINGTON, IL—Upgrading video control and distribution throughout a building, campus, or to satellite facilities can present a challenge in terms of the cabling. As Willow Creek Church in South Barrington, IL discovered, Contemporary Research offers a range of HDTV display control, digital signage, and tuning products that leverage existing coax infrastructures without the need for a costly overlay of a control network.

When Willow Creek built a new 7,500-seat auditorium with supporting rehearsal, staging, overflow rooms, and classrooms at its main campus—there are also six satellite campuses located throughout Chicagoland—the church’s media staff had to find a way to integrate video media distribution into the facility. “One of our key challenges was selecting a common, practical pathway for distributing live video, digital signage, and other media resources to over 100 displays across a very large facility,” explained David Cooke, video system director, Willow Creek Church. “In addition to carrying signals over long distances with little latency, the pathway must seamlessly carry full HD video in the future.”

He noted, “Baseband twisted-pair and ethernet systems didn’t make the cut. Only RF coax met all the tests. Not only can we broadcast many SD and HD channels, but also Contemporary Research’s display system controls the displays over the same RF network, dramatically reducing integration costs.”

Beginning in 2010, he continued, “We upgraded our RF-delivered signage using the Contemporary Research QMOD-HD HDTV Modulator, a fantastic improvement over analog. Now we’re using the QMOD-SDI to broadcast our service directly from our video system’s SDI feed. We’re also expanding QMOD and Display Express technology to our satellite churches.”

Willow Creek meets a variety of needs by utilizing RF as the common media backbone, he explained. “Some channels deliver signage to displays in foyers and hallways, while others provide live video from the sanctuary. Our handicapped seating section features seatback video displays, allowing the members to stay connected to worship when others are standing. A master event channel superimposes the house video time code over a wide shot of the stage, keeping actors, singers, and presenters backstage and in staging rooms in precise sync with their entry into the service.”

“Their software made system setup and operation a snap for our staff,” Cooke confirmed. “We don’t need to hire a custom programmer every time we make a change, meeting a core criterion for the design team.”

“It’s a very slick way of being able to control hundreds of TV devices on a campus that is already utilizing copper cable,” Burns commented. “That’s the beauty of it. Anyone faced with a new installation might consider this solution. There are other ways, but you end up having to pull a lot more wire and cable. People don’t want to have to pull another cable to all of those TV s just to be able to control them. Your investment is in a little bit more hardware, but you’re not pulling cable.”

Added Cooke, “While Willow Creek is a large community, we have the same values of stewardship as other churches, large or small.” As a result, he said, “The excellent cost efficiency of RF delivery and control was also a factor.”