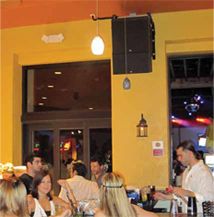 SOUTH BEACH, FL—The marriage of traditional with modern is what Taverna Opa is all about. The restaurant/ night club just completed a new location and, to create a most festive environment, a potent sound system built around components from the D.A.S. Audio catalog was deployed.

The loudspeaker setup in the dining area serves as the primary music system during dinner hours and augments the dance floor system later in the evening.

Hollywood, FL-based FM Labs and C-Spark Systems jointly designed and installed the new sound reinforcement system for the popular South Florida eatery. Located in an open-air shopping mall, Taverna Opa’s entrance faces a courtyard, so in addition to deploying a sound system inside the premises, the design team was also tasked with placing loudspeakers in the courtyard to set the mood and attract clientele.

“Taverna Opa is a combination restaurant/nightclub with a Greek/ Mediterranean theme,” said Roly Aspuru, VP of C-Spark systems. “During dinner hours, our client wanted Mediterranean-themed background music to be played through the system, then later in the evening the atmosphere becomes a lot more fun and energetic. We opted for a sound system focused on the dance floor, a second loudspeaker setup to cover the dining area, and of course, a third system outside to attract patrons.”

The dance floor portion of Taverna Opa’s new sound reinforcement setup incorporates four D.A.S. Audio Compact 2 loudspeakers. These powered, 3-way mid-high loudspeaker systems are flown over the four corners of the dance floor and angled down at the crowd. Low-frequency support is provided by two D.A.S. LX-218A powered subwoofers. The two sub bass enclosures are stacked one atop the other and placed in a specially designed and insulated recessed cavity at the front of the stage area to ensure suitable isolation from the DJ booth, which is located directly above and slightly behind the subwoofers.

The loudspeaker setup in the dining area serves as the primary music system during dinner hours and augments the dance floor system later in the evening. The setup is comprised of D.A.S. Avant 12A powered, 2-way loudspeakers in tandem with Avant 18A powered subwoofers. The two loudspeaker clusters—each consisting of a single Avant 12A and Avant 18A—are flown in a left-right stereo configuration.

“Taverna Opa is a good sized facility that attracts upwards of 500- 600 people on busy nights,” Aspuru said. “We started the project in January and completed it in March, just prior to the grand opening. The fact that the entire loudspeaker system is self-powered has proved to be quite a benefit. We didn’t have to concern ourselves with matching power amps to the loudspeakers and this simplified the cabling process considerably.”