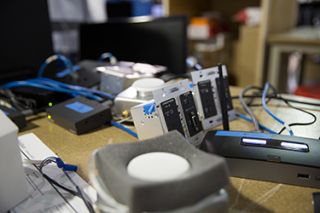 In a quiet corner of the Hauppauge Industrial Park, which with its more than 1,300 companies is the largest such center of innovation on Long Island, and by some metrics, is the second most sizable nationwide, there is a company those in the AV industry may have heard of, called IVCi. Most probably think of it as “that videoconferencing company,” and that would be accurate, since when it was founded by Robert Swing nearly 20 years ago, it was one of the first AV enterprises to place at its foundation a business framed around those services.

Having thus built a managed conferencing business that represents 15% of its business, with a 99.99% meeting success rate , IVCi was naturally ahead of the curve on the collaboration trend, rebranding with the tagline “Collaborate Anywhere” last year. IVCi has the hardware chops to support that notion, running a national operation from its New York headquarters, with Full Functionality Testing enabling AV setups to ship from its loading docks and arrive onsite as close to “plug and play” as is technologically possible.

And guess what? All that data is then mined for project management, labor estimates (calculated to the minute!), maintenance, and numerous other elements of IVCi’s business, right down to how many rounds of foosball can be played on break in the back room.

The original objective in building this suite of software was not to create a fleet of robots, but rather to change the management structure, explained Curtis Heath, who joined IVCi as senior vice president of business operations in 2010. Heath’s background is in business efficiency, system architecture, and process alignment, so he pretty much had a blank slate when he arrived in AV. “Our goal was to free up management bandwidth so they could work on the big picture,” he elaborated. “Instead of management policing people, we’ve built that concept into the software.”

Beginning with the customer experience and working backwards, each piece of software was built so that data from the end result cascades down into project management.

Essentially, IVCi was born as a virtualized company with roots in managed conferencing, and now has further virtualized itself with centralized software systems for every step of the process except for physical deployment of hardware. Watching Tim Hennen, senior vice president, audiovisual integrated services for IVCi demonstrate how IVCi’s sales presentation app makes it easy to click through technology setups and confirm an order in the same way one might book a flight, and then knowing that an automated sales proposal will be generated within minutes for day-two delivery after close, I have to say, my mind was blown. The engineering team then generates a spec, the shop builds the system and tests it, and its shipped out to Tulsa or Los Angeles and from the minute it lands until the day its decommissioned, IVCi is supporting it via its ActiveCare program, which automatically rolls trucks for break/fix and standard maintenance.

All of this is conducted from Hauppauge. As Heath pointed out, “The software makes the regional office obsolete, we’re a lean and mean operation.”

IVCi does have some remote operations in terms of redundant backup for its databases, however. Its business continuity program has long been in place, with many clients running mission-critical operations through its offices, including one with offices in 86 countries which IVCi supports from Hauppauge. The system works—there were no outages or problems at all during Superstorm Sandy in 2012.