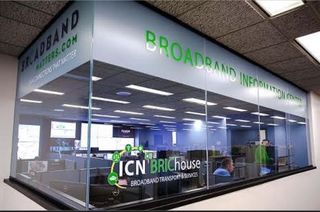 “I wanted to create a visual operations center for the advanced layer support of our operations network, but we didn’t have a suitable place to monitor and do it in a way that I felt was carrier-grade,” said Ric Lumbard, Executive Director at ICN. “Establishing the Broadband Information Center came out of that desire.”

ICN moved operations out of a bullpen type configuration, with employees viewing information on desktop computers, to a purpose-built area for the BRIC.

“I wanted the operational aspects of the ICN, not just the optics, but the operations site of the ICN itself to be in the forefront,” Lumbard said. “It’s important that when people come in for meetings they know the ICN takes the operational environment of its network very seriously.”

“Visitors and employees would watch us install the flat panels, with the room getting brighter and brighter as they were being turned on,” said Zach Potter, CCS Presentation Systems. “People were watching to see what the final product would be. When you see it, it has a ‘wow’ factor.”

The Christie flat panels display gives additional visibility to network outages, allowing ICN to respond when cyber-attacks are identified on the network or other security issues arise associated with critical infrastructure being served by the ICN.

“We’ll begin pushing images and other pertinent areas to the security conversation to a point where we’re monitoring critical infrastructure,” Lumbard said. “The end result is that we’ll be able to respond very quickly and collaboratively when those things do begin to happen.”

Christie nodes are driving the 12 panel monitoring displays
A future goal is to sync the BRIC’s video wall to various locations, such as ICN’s 24/7 Network Operations Center located 13 miles away.

“Our Broadband Information Center empowers the ICN to collaborate more quickly with our users and other agencies,” Lumbard said. “The Christie flat panels are an excellent tool for our operations staff to view situations at the same time, instead of crowding around a small computer monitor. The functionality allows the team to work together, make decisions, and implement real-time solutions when monitoring Iowa’s statewide fiber optic network.”