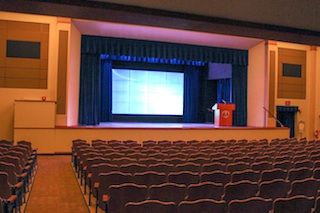 "The room is primarily used for lectures, guest speakers and small group performances, and our primary focus was on achieving superior intelligibility," explained Nancy Carlson of Audio Architects in Chippewa Falls. "But there are also a number of smaller musical groups and other performances in there, and we wanted to design a system that would be flexible enough to adapt to a wide range of programs and performances."

The system includes one of the first installations of the new generation of Iconyx IC Live digitally steered column arrays. As Carlson explains, the hall's new architectural design enabled the two ICL-FR-TRIP columns to be completely concealed.

"They wanted a classic look, much like when the auditorium was built in 1916, and they didn't necessarily want to see the speakers," Carlson said. "They had designed some decorative columns on either side of the proscenium, which provided us with a perfect location for the Iconyx columns." Four DR18-2R dual 18-inch powered subwoofers are also concealed in cavities in the front wall. "We had to have a general contractor reinforce the platforms, but we were able to hang a sound-transparent panel in front of them, making them equally unseen."

The audio system also includes a large-format Yamaha M7CL 48-channel digital console at Front of House. "We provided inputs at several different points in the room, and on stage, all wired back to the FOH console," said Carlson. A Biamp AudiaFLEX CM unit handles system DSP.

Carlson says the IC Live's steered beam technology provided an ideal solution for one of the room's biggest challenges.