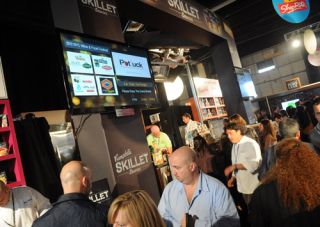 Digital signage technology from LG was front-and-center at The 2012 Food Network New York Wine & Food Festival, presented by FOOD & WINE. The festival, which ran through Sunday, was a blending of gastronomy and innovation thanks to home appliances, home entertainment and digital signage technologies from LG.

As title sponsor of the Festival's Grand Tasting event, ShopRite incorporated LG’s EzSign into its main stage at Pier 57 to display content from their partners and “Potluck” bloggers involved in the event. All day, all-inclusive tickets offered access to culinary demonstrations from top Food Network talent and celebrity chefs, plus samplings of wine & food from NYC's top restaurants and Shop Rite partners making this a popular venue during The Food Network New York Wine & Food Festival.