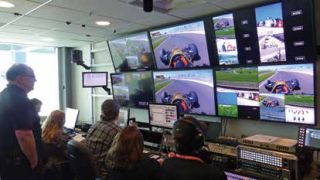 The new permanent control and broadcast room replicates the components usually found in mobile broadcast trucks, and supplies the HD video feeds and graphics to the video boards around the track. Screaming across the pavement at 230 miles per hour, today’s IndyCars are marvels of modern technology. But up until this spring, the technology at the facility that hosts the sport’s greatest event, the Indy 500, was relatively ancient.

At Indianapolis Motor Speedway, the world’s largest-capacity sports venue, the technology for the in-venue broadcast systems was 10 to 15 years old, and based on 4:3 aspect ratio, standard-definition video. Due to the success of Panasonic’s work at other major sporting venues over the past few years, including Texas Motor Speedway and Churchill Downs, home of the Kentucky Derby, the speedway management chose the company to upgrade its aging infrastructure. But to do so presented some distinct challenges.

The biggest expectation, Hanak said, was the sightlines. Unlike the other racetrack installations, where the company was able to install one or two massive video boards, the peculiarities of the facility at Indianapolis made such an arrangement unfeasible without disturbing spectators’ views across the infield. So Hanak and his team decided to go with a distributed solution, with 20 large video boards positioned around the 2.5-mile track.

The newly renamed Panasonic Pagoda, which houses the control room These video boards—composed of Panasonic video wall modules ranging from 10-millimeter enhanced resolution LED to 16-millimeter SMD LED—augment the spectating experience, providing fans with high-definition views of the entire speedway. But what the fans don’t see is the technology that drives these displays: the equipment in the new broadcast and control room housed within the Pagoda, the distinctive, 13-story-tall, glass-sheathed tower at the start/finish line.

Steven Webber, systems engineer at Panasonic, was tasked with designing the broadcast and control system, which was to be a permanent installment of all of the components typically found in the mobile broadcast trucks that accompany almost every televised sporting event.

“The integration of the Vizrt graphics system was very unique,” Webber said. “It was a very complex, new setup for Vizrt, that uses graphic animations and their new scaling abilities of their newest systems. So we helped beta test it with engineers in Norway.”

The Vizrt system, made up of the Viz Trio and Viz Engine HD SDI, adds an entirely new dimension to the race experience for spectators. The system pulls myriad data, including all of the car timing and telemetry, and displays it on the video boards. So not only can the race audience view the action on the entire track, but they can see all of the data behind it as well.

One of the 20 new HD video boards at the speedway. The Vizrt graphics system in the control room can supply these screens with a wealth of data, including speeds, race positions, and car telemetry. “They can look up and see the top order of the cars, who’s in number one position, their speeds, their tachometers, all the telemetry about their cars’ information like how hard they’re breaking in the corners or who’s following them,” Webber said. It’s all put through the Vizrt system, and presents it on the LED screens in a nice way for the audience. We customized that solution for Indy.”

According to Hanak, engineering the solution that Panasonic ultimately implemented took two months longer than the actual installation. The team worked from August 2014 until this January designing the system, and worked from then until mid-May to integrate it.

Webber said that the video feeds were able to be distributed on most of the preexisting fiber-optic infrastructure, with only about 10 percent of the cabling needing replacement. In the end, the labor seems to have paid off, in a technologically enhanced show at the event known as “The Greatest Spectacle in Racing.”

“Better than 98 percent of the viewing audience—which is 300,000- plus people for the main event, the Indy 500—a better view of the race than they ever had previously,” said Hanak. “We’re very pleased of where we ended up in terms of the improved experience for the fans.”