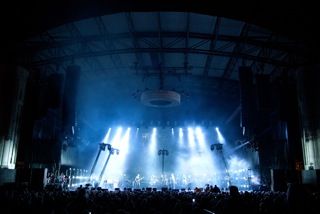 On the cusp of dropping off of the radar for a full year's hiatus, Peter Gabriel is currently treating fans in select North American cities to a brief tour celebrating the 25th anniversary of his multiplatinum album, So.

Running from September 16 through October 14, the tour—known as Back To Front—finds the group performing Gabriel's chart-topping So album in its entirety after an acoustic first set and electronic second set of the artist's other hits.

According to Firehouse Productions system tech Jamie Pollock, most of the stops on the 13-city tour utilize a FOH system featuring left and right hangs of 14 K1 plus six KARA below for down-fill as well as adjacent hangs of eight K1-SB subs. Out-fills are typically comprised of an additional 10 K1 and six KARA flown per side, paired with eight ARCS and six dV-DOSC below for front- and lip-fill.

To further augment the LF reinforcement, the tour is carrying 20 SB28 subs set up in an LCR configuration—six per side stacked under the mains with two spaced blocks of four in the center—all in cardioid mode. The entire loudspeaker system is powered and processed by a total of 48 LA8 amplified controllers housed in eight LA-RAK per side. All amps are receiving AES/EBU feeds as well as analog for redundancy.

"I've been using K1 since 2008 and have not come across a better system for large-scale shows," said Pollock, who has also taken a similar rig out on tours with Radiohead, Nine Inch Nails, Jane's Addiction and Bob Dylan, among others. "The system performs very consistently on a day-to-day basis and always provides an accurate translation of the mix throughout the venue.

"The most important part of my day is spent using SOUNDVISION to map out each space and create a prediction of the ideal system for the environment. The software is extremely accurate at modeling what the final result will be and there's never a question of coverage because, when deployed properly, the system does exactly what SOUNDVISION says it will.

"On the topic of software, I've also really been enjoying the release of LA Network Manager 2; the operation is a lot smoother and I like the new layout. It's just another tool I rely on that goes hand-in-hand with making the K1 system deliver the way it should."