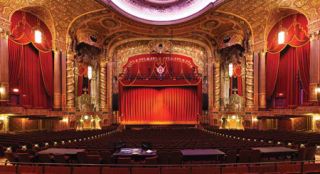 The grand elegance of the original Loew’s Kings Theatre, which opened in Flatbush, Brooklyn in 1929, was hard to beat. Ornate from top to bottom, it remained a spectacle for the crowds, which eventually thinned, until its closure in 1977. In the fast-changing city, the theater remarkably remained standing and vacant (aside from a few cats who lived backstage) for decades, until New York City government agencies found a way—and the money—to intervene. The $95 million restoration has reinvigorated the space, but while it’s just as spectacular, it’s ages away from how it was on its first opening date—in no small part because of its modern sound installation.

The renovated Kings Theatre relies on d&b audiotechnik line arrays to cover the wide seating area. Though its history is long, the restoration was comparatively quick, and that goes double for the sound. Systems integrator Acme Professional started on site in August of 2014 after being specified by Akustiks, which was handling the acoustics and sound design for the hall. Starting in September, Acme had someone there full-time to get the racks built, the amplification installed, and finally fly the loudspeaker system about two weeks before the first public event in the building, all leading up to the grand opening concert featuring Diana Ross in February 2015. And everything has sounded as spectacular as it’s looked from day one.

“We were fortunate in good engineering on Akustiks’ part in that the array covered the room very nicely from the beginning,” said Tom Clark, principal at Acme. “We’ve made a couple of fine-tuning adjustments with Akustiks since that time, but the basic design was very solid. I think in part due to their early entry into the process, they’d had an opportunity to revise the design a little bit, and so it helped us to be very up to date as we were installing and getting ready to start using it.”

The initial setup included 10 d&b audiotechnik boxes—four J8s and six J12s—flown on each side of the stage, but Acme was able to reduce that number to nine boxes per side after d&b introduced its ArrayProcessing technology, which, in essence, takes the line array from being treated as if it were a single loudspeaker to being treated to more like what it is—a series of individual loudspeakers. Acme had tried it out in its second North American use, at the legendary Apollo Theater in Harlem, on the d&b V system they had installed there. At the Kings, which is a larger, wider space, with nearly triple the seats, the J system and the ArrayProcessing has proven to be a winning combination.

“The results have been spectacularly good,” Clark said. “In a system that was well regarded by everyone who came in right from the beginning, it is now one of those places where you can come in to work a performance, listen for a few minutes, and breathe a big sigh of relief, because the majority of your work has already been done for you, and you just need to do your show at that point.”

The setup for a Sleater- Kinney show in December 2015. Clark explained that the multiple pre-set configurations available to the d&b rig has been a great advantage at Kings, where the programming lineup of traveling shows runs from musicals to kids events to virtually every genre of live music.

“It’s really just recalling and loading a different scene, but it gives you the ability in this case to make the flown system operate lower in the frequency spectrum to make up for the subwoofers that you’ve left backstage, so you don’t have to look at them out front,” he said.

One of the ways the Kings managed to operate originally without amplified sound was by creating a shallow under-balcony area, which remains the case in the restored theater. To account for quieter shows, like musicals and dance performances, Acme installed 10 d&b 8S speakers as under-balcony fills to cover the few rows in that area, driven by the same digital signal processing amplifier type as the main system—the d&b D series—just a lower power version.

“For louder events, the line arrays cover that area very nicely. There’s no shadowing—the arrays are fairly low physically, they have a direct line of sight to all those seats under the balcony,” Clark said. “When you’re doing a show that’s less heavily amplified and you don’t want the energy level to be so high in the front of the room, the under-balcony speakers give you a little bit of extra high-frequency information at low level than you would experience if you were delivering it all from 140 feet away.”

Though they’re still tinkering—Acme intends to fly a single d&b JSub subwoofer per side above the arrays to minimize the visual impact of the ground-stacked subs—Clark said the several shows he’s seen have been full of appreciative audiences.

“The show that you’re hearing in the front row is very similar to the one you’re hearing at the mix position, which is very similar to the one that you’re hearing in the last row of the balcony,” he said. “The Bjork show was particularly fascinating to me as a technology guy, because she’s deep into projection,” We were proud of the fact that our HD-SDI video lines worked perfectly from her video server backstage up to the projectors in the followspot booth 325 feet away. We got early kudos for having the infrastructure be faithful to the signal that it was trying to carry.”

However, Clark is quick to note that the project wasn’t a solo gig by any means, pointing to the design work of Akustiks’ Anthony Nittoli and Jordan Lytle; the team at Kings Theatre, including David Anderson of ACE Theatricals, now part of the Ambassador Theatre Group, director of production Steve Ehrenberg, and the in-house audio team of Nate Honor and Erica Stolz; plus his own crew at Acme Professional—his partner, Pete Comos, Local 3 subs Klear Electric, and project managers David Thomas and Patrick Pummill.

“It really was a team effort on everybody’s part,” Clark said. “We had great help within our own company, and I just can’t say enough about what a fantastic job Akustiks did both with the design and the documents. And we were really lucky with the house staff—we’ve been very happy with that relationship, and I think they are, too.”

Mary Bakija is a freelance writer based in Brooklyn, NY.