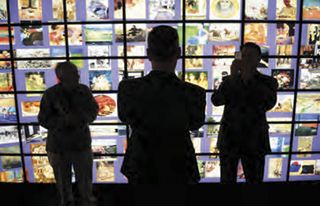 Stony Brook University’s computer science department tiled 416 monitors together using Gefen DisplayPort Extreme Fiber Optic extenders in 75 and 100-foot distances, supporting resolutions of 2560x1440.With the AV industry currently poised for an analog sunset and a 4K sunrise, the prospect of a standardized connector—if such a thing could even happen—is very much up in the air. HDMI, HDBaseT, DisplayPort/ Thunderbolt: will there ever be one connector to rule them all?

“Since we introduced the DigitalMedia line in 2009 we’ve shipped more than 1.5 million HDMI connectors,” reported Justin Kennington, DigitalMedia product line manager for Crestron. “In the broader world, HDMI has surpassed two billion connectors in the world.”

“We just have to accept that, at the moment, HDMI is ubiquitous,” agreed Bob Sharp, director of sales engineering at SVSi, a provider of networked AV distribution equipment. But where things get complicated, said Sharp, is the arrival of 4K content.

“Currently, if you go down and buy a 4K display, you’ve got no way of driving 4K content to it. So existing 4K displays just have a standard HDMI connector and they are simply upscaling 1080p to Ultra HD. HDMI 1.4 can accommodate 4K, but is that going to be the 4K connector of choice next year?”

One thing is certain, according to Mike Tsinberg, founder and president of Key Digital, a digital video technology company— the demand for analog connectors has pretty much dried up: “For the last year, two years, we haven’t heard any requests for analog interfaces. In the custom space it’s overwhelmingly HDMI.”

Analog connections—composite, component, S-Video—have disappeared from many products, he continued. “And quite rapidly, especially in the consumer space. They’ve all been replaced by HDMI.”

Even so, according to Sharp, “We still use DVI as an input to our encoders, because it can support analog.” Although there are still legacy analog components in the field, next year’s analog sunset will see that requirement disappear soon enough. “We would then have to make the decision whether to go HDMI 1.4 or DisplayPort or Thunderbolt,” he said.

But as Kennington commented, HDMI has some problems in the pro AV world. “It’s a non-locking connector, so it is possible to accidentally unplug something. The other problem is, because of the style of the connector, it’s impractical to pull HDMI cables through walls. Over short distances, with a pre-terminated cable, it’s OK, but any time you have a conduit, pulling a cable with a connector that size is very difficult.”

Whereas other connector types permit field termination, he added, “With HDMI that’s not terribly practical; you’ve got this very high density, 19-pin connector that in the best case requires some very high-end soldering skills on the part of the installer.”

Not that HDMI can travel over any great distance, either: “The HDMI spec does not define a maximum length; it defines a minimum performance capability,” said Kennington. “There are a few tricks one can play with the signal—some extra amplification, equalization—to get to around 100 feet, but for practical purposes we never recommend going beyond 30 feet with HDMI cables.”

Gefen, a connectivity solutions company, has developed a variety of products to extend the reach of HDMI, including its FST (Fast Switching Technology) and ELR (Extra Long Range) Technology products. Additionally, said Randy Wilson, Gefen’s director of marketing, “You take the benefit of wireless HDMI today, where there’s zero latency, you’re passing all seven channels of Dolby and DTS formats, so there’s really no advantage to running new cable. Our new HDMI device is broadcasting and receiving at 60 GHz, which is way beyond the range of everything else.”

HDBaseT, which offers HDMI within a transport that can be extended much further over simple—and inexpensive— twisted pair Cat-5/5e/6 cable, also has its advocates. Indeed, Gefen’s ELR devices utilize HDBaseT technology to enable multiple signals, including HDMI, to be extended over a single cable.

“HDBaseT doesn’t supplant HDMI,” said Kennington. “It’s carrying a real HDMI signal through a Cat-5 cable. They’ve kept all the features of HDMI but replaced those things that are not friendly to our installers.”

But HDBaseT is still expensive compared to HDMI, noted Tsinberg. “I don’t see HDBaseT penetrating the consumer market, but it’s made a tremendous impact in the commercial space, where people can now wire with twisted pair for longer than 30-foot connections.”

Prices are dropping, he added: “There are new chips out there that are less expensive. Quality wise, HDBaseT is a no-brainer; it’s the best Cat-5 interface today. Sometimes I wish HDBaseT had come out before HDMI— then we would have HDBaseT everywhere.”

But, as Sharp cautioned, “The reality is that it is a very proprietary technology available from only one manufacturer in the world. Unless the manufacturer finds the killer consumer app for HDBaseT it will always be a specialty technology.”

HDBaseT’s single-source chipset could be a problem, he added, “Particularly as Valens Semiconductor is 10 miles outside of Tel Aviv. With the current atmosphere, one misplaced rocket and—no more Valens.”

There is another drawback to HDMI, according to Wilson: “We felt that HDMI was the ideal connection, but then the movie industry got involved in it, and said, ‘Wait a minute—it’s TOO good a connector.’”

The Intel-developed HDCP copy protection scheme as well as EDID display recognition certainly presented a challenge to connectivity specialists. “But that’s one thing that Gefen has really figured out,” said Wilson. “Now we’re looking at HDMI 2.0, which is a whole new game.”

HDMI 2.0, designed to support 4K or Ultra HD—which has four times the resolution of 1080p—may be coming, but there’s not a lot for it to support yet. Content creation is expensive and the broadcast, satellite, and cable networks don’t really have enough bandwidth for 4K, Tsinberg pointed out.

HDMI’s current version 1.4 also supports 4K, but only via frame doubling for 60 Hz display. “HDMI is struggling to get to higher resolutions than 1080p,” said Kennington. “The specification version 1.4 certainly defines ways to do 4k x 2k video, up to 30 Hz.”

That makes HDMI fine for what Kennington calls the “middle resolutions,” such as the 2560 x 1440 Apple Cinema and Retina displays. But, he noted, “DisplayPort can do 4K x 2K at 60 Hz in its fastest implementations. But HDMI has such a head start and such a foothold that it’s hard to imagine DisplayPort as more than a high-end specialty connector.”

Sharp is certainly attracted by the potential of DisplayPort, and therefore Apple’s Thunderbolt, which comprises DisplayPort plus additional connections: “Thunderbolt is by far the most compelling technology, because it’ll support right up to 8K.”

“I think we’re going to see a struggle between DisplayPort and HDMI, unless there is an overwhelming investment on the part of PC makers,” said Tsinberg. “In PC world, everybody is moving to mobile platforms, which is wireless more or less; they’re not including any more connectors than they have to.”

But Kennington is pretty sure who will win that battle: “The idea of Samsung saying, ‘We’re getting rid of HDMI next year and only using DisplayPort’ is ludicrous; it’s not going to happen.”

“It seems to me that eventually the only logical universal connectivity to anything is an RJ-45 network jack,” said Sharp. “Because as we migrate to 10 gig over fiber and over copper that will do the same as HDBaseT. And it’s networked, it can be switched and routed, and you can plug other things into it.”