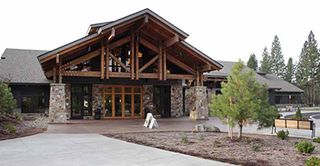 “This facility is an aquatics, fitness, and meeting center, but more than anything else, it’s a place for homeowners and guests to come together and form a real community.”

That’s Hugh Palcic, assistant general manager of the Sunriver Owners Association, talking about SHARC, the Sunriver Homeowners Aquatic and Recreational Center in the eastern foothills of the Cascade Mountains.

Building community is difficult in a place like Sunriver, where guests and visitors can swell the population to 20,000 or more, yet only 1,700 are year-round residents. Still, the association is more than meeting its goals, as the facility has attracted over a quarter million visits in its first six months of operation.

That’s in no small part due to the audio and video systems designed and installed by CompView Audio Visual of Beaverton, Oregon.

A great place to meet

Palcic says when they began the process of planning the facility almost two years ago, association administrators weren’t entirely sure what to expect of the audio and video systems. One of the general contractors they interviewed introduced them to CompView, and they toured a CompView installation in Lake Oswego, Oregon. “It was amazing to see what they were able to do with this older building,” Palcic said.

“One important goal for me,” Palcic said, “was to make sure we welcomed visitors even before they got to the door. Our outdoor sound system creates a certain atmosphere—it’s almost like the aroma from a good restaurant or coffee shop—as you walk up from the parking lot or ride in on your bike.”

“CompView gave us three different music sources, so we can create just the right feeling,” Brad Olson, the association’s IT manager, said. Once inside, a video signage system brings visitors up to date. “We have over 40 clubs and other organizations in Sunriver; there’s always something happening,” he added.

Four meeting spaces are available inside to homeowners, renters and guests. A ‘living room’ with a fireplace and a 55-inch flat-panel monitor is used for club meetings and smaller events; the ‘Crescent Room’ includes a projection system and iPod dock for presentations and meetings as well as fitness classes; and the combinable Dillon and Pringle Halls are available for larger meetings, parties and events. With a dual-screen projection system, the combined room can host up to 500 people theater style or 350 for a lunch or dinner.

“Because of the brightness of these rooms and the very high resolution required, we needed out of the ordinary projection systems,” Shannon said. “We decided to use InFocus projectors—two IN5535s in the combined room and an IN5110 in the Crescent room.”

The association runs all computer, control, audio, and video signals on just two sets of IP network wiring. The Crestron DigitalMedia network provides high-definition video throughout the facility at 1,920 x 1,200 resolution, plus program audio. Two VLANs carry other AV signals on the association’s IP network wiring: one carries all Crestron and Biamp control signals, the other paging and background music via CobraNet protocols. A crucial factor in meeting the SHARC budget was CompView’s best-practices approach of putting all of the AV traffic on category-type cable.Palcic said he’s heard nothing but compliments after hosting a wide range of events. These have included free outdoor concerts, weekly movie nights, regular meetings of the town and county government, a Nike corporate retreat, a high school prom, and a large number of community gatherings from potlucks to auctions to watching football and tennis on the high-definition TVs and projectors.

Shannon said that Palcic and Olson needed first class systems but did not have unlimited funds. “Our primary challenge was to provide very high quality AV within a realistic budget,” he explains.

A nice touch was the use of weatherproof loudspeakers throughout the installation. “We wanted to have the same tonal qualities whether you were outside or inside,” Shannon explains, “and the Bose FreeSpace line gave us the versatility to install smaller speakers in the smaller spaces yet cover the large areas as well.” For example, SHARC includes an outdoor amphitheater that can accommodate up to 1,250 people. “We decided not to include a performance audio system, given our budget and the fact that most bands want to bring their own. But we did install larger FreeSpace loudspeakers, and they provide everything you need for an outdoor wedding or corporate party as well as paging and background music.”

Sound strategy across the community

In Dillon and Pringle Halls Shannon designed an eight-channel sound system using a Biamp AudiaFLEX CM processor, an Ashly ne8250pec amplifier, and 12 FreeSpace DS100SE speakers mounted in the wooden trusswork of the ceiling. “When the space is divided, we send two-channel audio to the front and singlechannel audio to the middle and back of each room. That way, we can achieve a higher volume before feedback, yet still provide a stereo effect using only four channels.” When the rooms are combined, the system sends stereo audio to the front, middle, and back.

A crucial factor in meeting the SHARC budget was CompView’s best-practices approach of putting all of the AV traffic on category-type cable. Twisted-pair network cable is far less expensive than traditional coaxial cable, although it provides a higher quality signal. It’s also much easier to maintain, since Olson’s IT department can follow the same procedures they normally would for their computer networks.

The association runs all computer, control, audio, and video signals on just two sets of IP network wiring. There’s a Crestron DigitalMedia network, which provides full high-definition video throughout the facility at 1,920 x 1,200 resolution, plus program audio. Two VLANs carry other AV signals on the association’s IP network wiring: one carries all Crestron and Biamp control signals, the other paging and background music via CobraNet protocols.

“This approach helps make the system futureproof as well,” Shannon added. “It’s ready for media running at resolutions much higher than today’s 1080p, yet presenters and guests can still plug in their older analog equipment.”

As the team went through the design process, Palcic said he worried about installing such a sophisticated system. “It’s as if you’re buying a fighter plane and you don’t know how to fly it,” he explained. Shannon, however, assured him that they would simplify all operations with a Crestron control system. Today there are touch-sensitive wireless control panels in each half of the combinable room, simplified control from the front desk, and the ability to log on to the control system from any computer with Internet access. “It’s really very user friendly,” Palcic said.

Wherever possible, the system automates operations to make things easier. For example, CompView installed sensors to tell the system whether the air wall between Pringle and Dillon is open or closed. Staff can always override these settings, but the control system automatically configures the video and audio systems to work for one room or two.

Palcic and Olson say they were pleased and surprised by how smoothly the installation process went. Olson relates that the general contractor they hired had suffered some bad experiences with AV companies. But it seems that CompView was a cut above the integrators he was used to dealing with. “At the height of construction we had 175 workers on site,” Palcic said. “CompView worked smoothly with all of those trades and did their job flawlessly.”

Don Kreski is a frequent AV Technology contributor and the president of Kreski Marketing Associates.