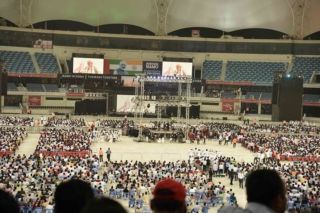 The event celebrated the first visit by an Indian prime minister to the UAE in more than three decades and featured speeches and performances for a crowd of 50,000 at the Dubai Cricket StadiumRegional distributor GSL Professional supplied SHOWTEC with the HARMAN Professional Solutions components. In addition to handling Prime Minister Narendra Modi’s address, they also delivered sonic high output for the international artists who performed.

While production companies like SHOWTEC prioritize the sonic performance of their equipment, the ease with which a system can be set up and operated under the pressures of a high-profile event is important. According to SHOWTEC, a system from HARMAN Professional Solutions features components optimized to work together, saves labor and enable the production crew to devote its full attention to the artists performing on stage.

“The JBL VTX line arrays were particularly impressive in their ability to deliver clear and powerful speech reproduction for the Prime Minister’s address,” said Wasim Shaikh, Sound Engineer with SHOWTEC. “Combined with the I-Tech HD amplifiers, there is not a system I can think of that can so elegantly transition between music and speech. The versatility of the HARMAN solution is unparalleled.”

Eight JBL VRX915M loudspeakers and four VP7212MDP loudspeakers made up the monitor system on stage, while a pair of JBL EON515XT loudspeakers was used as backstage monitors.

The main PA system featured a left-right configuration of 12 VTX V25 line array elements per side, accompanied by eight ground-stacked VTX S28 subwoofers per side. Crown I-Tech 12000HD amplifiers powered the system."Our audio engineers are always impressed with the top-notch quality of sound provided by the Soundcraft Vi Series as well as how easy they are to use,” Shaikh said. “We absolutely trust the Soundcraft Vi Series consoles for a wide variety of large and small events.”