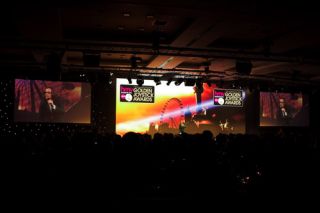 The ceremony – celebrating its 30th anniversary - was staged at the Westminster Park Plaza Hotel, London, UK.

It was the first time that XL has been involved in the event, brought onboard by production company Reality Ltd. with whom they have worked on numerous other occasions. XL Events’ Paul Wood project managed, working closely with Reality's Paul Corrick on the design, presentation and specification of the video equipment.

The event took place during the afternoon, and for the first time ever, a livestream of the ceremony was hosted on YouTube.

Content including Awards stings, graphics, logos and Playback were fed to the main screen from a series of laptops.

XL’s cameras were directed by Ruary MacPhie, well known for his work for bands and festivals, with a separate sub-mix used to feed the web stream plus a series of plasma screens around the foyer.

Wood said, “We were delighted to be involved in a prestigious event like this. It was a tight fit to get the full production into the room, but all departments worked closely and collaboratively ensuring all went well.”