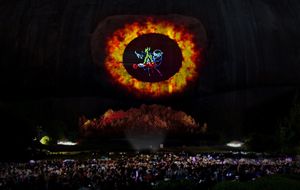 Listed in Frommer’s 500 Places to Visit with Your Kids Before They Grow Up and cited by the Atlanta Journal-Constitution as one of “35 Natural Wonders in Georgia You Must See Before You Die,” Stone Mountain Park is located just 16 miles east of downtown Atlanta. Taller than the Statue of Liberty and up to five times the size of an IMAX screen, Stone Mountain now bears the distinction of being the biggest outdoor screen on the planet, presenting a multi-dimensional show that harnesses the magic of state-of the-art digital graphics and awe-inspiring effects. Its newly enhanced “Lasershow Spectacular” is the creation of Full Spectrum, LLC who selected Barco’s event projectors, media servers and show control solutions to bring the world’s largest granite face to life.

Barco FLM HD20 3-Chip DLP Projector
Barco’s FLM HD20 projectors are the workhorse behind the illusion at Stone Mountain Park, creating a “virtual skin” projection on the 825’ tall granite outcropping. The FLM HD20 projector features 20,000 lumens, a 1080P, 3-chip DLP light engine, and a 3kW xenon lamp. Inputs include DVI(HDCP); 5-BNC RGBHV (RGBS/RGsB, YUV CS/SOY, Composite video, S-Video): SDI/HDSDI. In its class, the FLM HD20 offers some of the lowest noise levels known, thanks to its liquid cooling, which makes it a silent, unobtrusive ally for your venue. The FLM further features a sealed optical engine that prevents dust, smoke or other environmental contamination to its image quality.

“Thanks to Barco, we’ve been able to bring ‘Mountainvision’ to Atlanta, dramatically evolving this popular show into the 21st century with incredible special effects,” commented Paul Creasy, President of Full Spectrum and main conceptual designer for the show. “It goes well beyond a 3D movie, it’s a completely new viewing technology. To my knowledge, it’s the only show out there using a combination of video, lasers, fireworks and other pyrotechnics. Barco’s turnkey system – combining state-of-the-art HD projectors with innovative, content-rich media servers and a versatile lighting console – ensures that all components work together with a high degree of reliability, a critical requirement for a ‘live’ show.”

Projecting onto the side of one of the nation’s most historical natural landmarks – a highly irregularly surfaced mountain with varying depths up to 50’- is no easy task. “The extreme brightness, modularity and convenient lensing of Barco’s projectors are essential to creating the seamlessly integrated 3D imagery over the mountain’s dynamic face. The edge-blending is so smooth that it looks like a 5,500-inch HD TV screen!” continued Creasy. Barco’s FLM HD20 is an ultra-bright, durable three-chip DLP projector with full HD picture-in-picture capabilities. It is ideal for large venues that require extra brightness to show clear, crisp images, even in a luminous environment.

Barco’s FLM HD20 projectors create a 1:1 “virtual skin” projection, depicting unfurling flags that appear to float above the surface of the world’s largest piece of exposed granite in one of the patriotic scenes.

“Thanks to the FLM HD20s’ modularity and flexibility, we could mount the six projectors vertically to create three 16x9 fields to match the aspect ratio of the lasers,” continued Creasy. The mounting footprint also enables easy access for lamp replacement at any time “so the guest never even notices.” Creasy concludes, “The real benefits are in the single-source integration from Barco – we knew we could accomplish the image-blending and effects we needed with their turnkey solution, and were confident that all the components would work together. It was a really clean, quick install and the projectors worked right from the start in testing.” Due to the fact that the show’s “screen” is dark gray granite, the producer specified six projectors stacked in pairs to achieve the brightness and intensity required. Additionally, this configuration allows for natural redundancy.

The projectors are fed by three Barco High End Systems’ (HES) Axon Media Servers and driven by an HES Road Hog Full Boar console. The Axon servers provided the expansive, built-in image library and color palette that Full Spectrum wanted to “create special effects on the fly with a lot of fun and flavor,” while the Collage Generators proved to be essential in seaming together imagery from the six projectors. The Axon Media Server provides more than 1,400 stock media clips and features Curved Surface Support in addition to the collage generator. The Road Hog Full Boar offers robust lighting control, along with powerful programming features, to enable producers to create, manage, edit, and playback lighting and video projections in large-scale environments.

“The addition of the Barco projectors in the Stone Mountain Park Lasershow Spectacular brings the mountain to life in a whole new way,” said Gerald Rakestraw, vice president and general manager, at Stone Mountain Park. “The projectors have given us the ability to make it appear as if the mountain is crumbling right before your eyes. It truly is something you have to see to believe.”