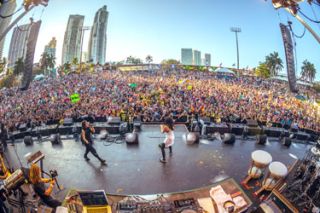 Ultra Music Festival 2015, which took place Friday to Sunday, March 27-29, 2015, drew thousands of music fans to Bayfront Park in downtown Miami, which has hosted the event since 2012. But not since the festival debuted in 1999 has the sound been this good.

Those challenges included keeping the sound for each stage contained within its area and avoiding overspill into nearby stages. For the Live Stage, Beach Sound assembled a K2 sound system whose main array consisted of 24 K2 enclosures flown 12 per side. Atop each main array were four K1-SB high power subwoofers per side. Along with a total of 32 SB28 stacked subs, the Live Stage had all the low end it needed and then some. In addition, two ARCS II constant curvature line source loudspeakers were used as side fills under two SB28 subs per side; six ARCS Wide enclosures were deployed as front fills; and, finally, 24 Kara enclosures were used for outfills. Onstage, a dozen 115XT HiQ active stage monitors joined several Kara enclosures to provide DJ foldback.

“L-Acoustics speakers—especially Kara—have become ‘the standard’ for EDM stage monitoring and were specifically requested by the artists for the DJ sets,” Serafini said.

L-Acoustics speakers, such as the SB18 subs, were found as part of systems on all of the stages at Ultra, but it was the K2’s first star turn as the Live Stage PA, and Serafini says its performance was magnificent. “It had the power we needed, but it was also a beautiful-sounding PA system,” he said. “That’s the word that comes to mind first: beautiful. It’s a sound you never get tired of hearing.”

Rat Sound has provided sound reinforcement for Coachella since 2001, when the festival was in its infancy. This year the Camarillo, CA-based sound company deployed EAW’s Anya line arrays at two of the tents—Gobi and Yuma—to ensure attendees receive the best festival experience possible.

“The Anya systems worked very well—we received a lot of compliments on the clear, hi-fi sound,” explained Dave Rat, owner of Rat Sound. “This was the second time we used Anya in the Gobi tent, the first time for Yuma. The adaptive control of the system allows us to minimize reflections off of the walls of the tents, which keeps the sound really clean—I was quite pleased with the outcome.”

The Gobi tent was approximately 18,000 square feet with an expansive stage set up at the far end of the tent. Gobi, known for its eclectic mix of alternative bands, had a lineup this year that included Kimbra, Lights, FKA Twigs, Cashmere Cat, and more. Two Anya arrays, made up of 8 Anya modules each, were hung to the left and right of the stage to provide clear, even coverage to the area.

The Yuma tent—complete with wooden floors and air conditioning—is the EDM capital at the festival, drawing some of the biggest names in the business. The tent is oval shaped, roughly 133x198 feet with a large, elevated DJ booth in the center of one of the longer sides of the oval. In this situation, Rat utilized four stacked Anya arrays to immerse the dance floor in sound. Each array was made up of a total of five Anya modules. The inner column was stacked three high, while the outside used two. Two of the arrays were placed to the left and right of a large, elevated DJ booth. The other two were placed on the opposite wall parallel to the booth. Each of the arrays were placed on top of platforms roughly five feet off the ground.

The two-day festival, featuring such artists as the Family Stone, Kenny Lattimore, Gerald Albright, the Jazz Attack Band, and Pieces of a Dream, was as demanding as the show is prestigious. Michael Schivo, the legendary promoter and founder of the festival, is known for his tough and exacting standards. H.A.S. Productions, a Las Vegas-based, full-service production company that is independently owned and operated, provided a sound-reinforcement system comprising 32 VUE Audiotechnik al-8 high-output loudspeakers, 16 al-4 subcompact loudspeakers, 12 powered hs-28 dual 18-inch ACM subwoofers and four al-4SB flyable isobaric subwoofers.

"We bought the VUE al-8s because we think it is the best-sounding PA out there," said Jay Easley, H.A.S. Productions's chief operating officer. "The al-8 and al-4 are the perfect loudspeakers to use at many of the Las Vegas venues in which we work. With VUE Audiotechnik, we were able to cover the entire 3,500-person SRO venue perfectly."

H.A.S. employed VUE Networked controlled V4 and V6 Systems Engines to power the al-Class FOH Line Array systems and the hm-112/212 monitors used on stage. "It was a complete VUE production, and it was all from our own expanding VUE inventory," said Easley. "I think we may be the biggest VUE house in the world right now."

Billed as Disclosure & Rudimental Present Wild Life, the four-stage, two-day festival event was staged at Brighton City Airport, a general aviation facility in Shoreham where, as the title suggests, Disclosure and Rudimental were the headline acts.

Winds gusting up to 30 mph on the opening day were no match for the power of MLA, and the system optimizations comfortably satisfied the 75 dB offsite sound requirements while at one point achieving a staggering SPL of 105 dB at the sound desk during Disclosure’s set.

As Capital general manager Paul Timmins observed, “Some properties were as close as 1300 ft. away, and the measurement points varied from a travelers’ encampment with caravans to a church whose 6 p.m. Sunday service coincided with the rappers kicking off on the main dance stage.”

And yet with a dedicated line set up by the promoters, as is customary with a new event, the number of complaints was significantly lower than expected. With the two Main and Dance outdoor stages complemented by two Khyam tents (including a dance tent), the challenge was to keep the sound contained without spillage.

“I could progressively fine tune the optimization on the second stage while the show was running to suit changing requirements without physically needing to move anything,” said Martin Audio product support engineer Chris Pyne. “Typically, heavy dance music has a pronounced low end 30 to 80 Hz so the sub frequencies generated are large wavelengths, but we could re-optimize our sub array to tighten the horizontal pattern control. One of the beauties of the MLA systems is that it’s an evolving system adapting to the environment and needs of our partners.”

Both the Main and Dance stages featured similar PA configurations — 17 x MLA (plus an MLD Downfill) per side and 16 x MLX in a broadside cardioid array. Main stage also featured four additional MLAs in a groundstack on one side — and there was a token presence of two delay towers, comprising eight MLA Compact and three DSX subs, set 260 ft. back from the stage.

Capital also took the opportunity to demo their MLA Mini as DJ monitors/infills in the dance tent, with two stacks of four each side of the DJ booth underpinned by an MSX sub. “This gave us a chance to experiment with different presets and we learned a lot. The top end worked particularly well and physically it was perfect,” he said.