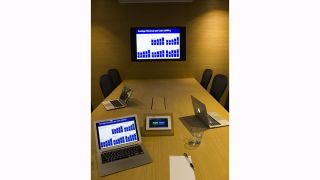 The 11,000 square-foot EWoffice Business Center in Costa del Este, Panama City, Panama, houses dozens of local businesses with more than 40 offices, shared boardrooms, kitchens, lounges, and more. After the building’s owner and operating administrators experienced the benefits of ELAN control in a nearby shopping center, they called on local technology integration firm Domotic Design to conceptualize and install a comprehensive automation system of their own.

ELAN set up in the EWoffice Business Center

“The original scope of the project was to use an automation system to reduce electricity consumption generated by lighting and HVAC, and lower the costs of building operation,” Domotic Design owner and project manager Daniel Ramirez Parma said. “Once we began building out the design, we recommended that they take advantage of the other subsystems ELAN can automate and control, like audio, video, security, access control, intercom, motorized shades, and more. The end result satisfies our customer's initial request, and provides tenants with one more reason to rent space at the EWoffices Business Center.”

Domotic Design installed an ELAN gSC2 controller and ELAN g1 controller to anchor the entire building’s system, along with two ELAN gTP7 and gTP4 touchpanels for one-touch audio and video control in central shared boardrooms. Remote access is enabled by the ELAN App, installed on the building owner and manager’s smartphone devices.

“Since the occupying businesses and the building’s managers use the ELAN system for completely different reasons, we configured the ELAN touch panels with custom pages that only allow tenants to control the audio and video,” Ramirez Parma said. “Other involved systems throughout the entire building, like lighting, HVAC, and security, are only accessible to the owners locally and remotely.”

ELAN automation streamlines management of the building for the owner and the operating administrator. Since the EWoffice Business Center’s HVAC is entirely dependent on an adjacent cooling tower’s pumping system, the corresponding cold water pumps do not function 24 hours a day and thus need to be closely managed so as to not rev up energy costs.

With ELAN, Domotic Design configured an automated HVAC system that turns on and off on a strict schedule without any action needed on the manager’s part. Every day at 7:00 a.m., the system enters “Home Mode,” which manages the complex HVAC system, as well as lighting and security. “Away Mode” goes into full effect at 8:00 p.m., which safely powers down all systems.

“This new automation functionality is extremely helpful for building management,” Ramirez Parma said. “We configured the system to even send push notifications to the owner and administrator alerting them that, on each day, everything turned on and off on schedule. They can check in on HVAC as well as their security camera feeds stationed around the building from anywhere in the world.”

Similarly, the building’s owner wanted to facilitate control of the lighting depending on the day and time, and based on the occupation of the offices. Domotic Design integrated 16 loads of Lutron RadioRA2 lighting in the common areas into the ELAN system to effectively manage when they powered on and off. “Lighting control significantly reduces costs,” Ramirez Parma added. “They never again have to worry about a tenant leaving the light on overnight and driving up the electricity bill.”

The ELAN system also has enormous benefits for tenants occupying the space. Domotic Design installed a Niles Auriel multiroom audio system, enabling occupying businesses to stream audio and video instantly whenever desired. As Auriel is based on the ELAN Control Platform, it was particularly easy to integrate. The system is divided into four independent zones, including the building’s reception area, the coffee lounge, and two board rooms—both of which have an integrated Apple TV and ELAN video matrix for presentations. Different businesses can play their own music in designated areas thanks to the multiple Auriel zones.

“The multiroom audio system creates a more pleasant environment for renters and visitors,” Ramirez Parma said. “They have full control over the content they’d like to show in the boardrooms during the meeting, or during a break in the coffee lounge. It’s so incredibly intuitive and easy to use.”

According to Ramirez Parma, ELAN was the best system for this particular project because it was easily personalized to all of the customer’s needs, and it seamlessly integrated with existing technology in the building. “It wasn’t necessary to run additional cables because ELAN integrated well with the pre-existing wires,” he said. “The building was already equipped with Honeywell Wi-Fi thermostats, which we were easily able to integrate into ELAN with a HouseLogix driver. It was so easy to install, configure, and now, it’s easy for the customer and their tenants to use!”