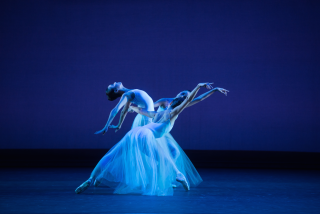 Mak sought to maintain the original lighting mood of Serenade and Castrati, with a touch of his own interpretation, and he took a new approach for Swan Lake. When he discovered that the venue’s new LED cyc lights didn’t fit his initial lighting proposal for the project, he replaced them with 12 ETC Source Four LED Series 2 Lustr luminaires outfitted with Source Four LED CYC adapters.

Mak says, “The venue’s original RGBA cyc lights made it impossible to create the L200 (Double C.T. Blue) that I needed for Castrati.” And in Serenade, an expansive range of blue was necessary to portray the beauty and mystery of the ballet. Mak was able to bring various blues to the stage, thanks to the flexibility of the x7 Color System in the Source Four LED Series 2 Lustr array. “The whole piece is about blue, based on the vision of the choreographer,” describes Mak. “The x7 Color System really helps deliver the widest range of color available from LED fixtures.”