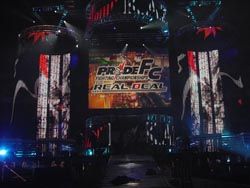 LAS VEGAS, NV--Combining sport and pageantry, Pride.33: The Second Coming, staged on February 24 at Las Vegas' Thomas & Mack Center, was a much-anticipated return engagement for this Japan-based brand of mixed martial arts competition. PRG provided a full package of production services, including audio, lighting and rigging, scenic, video and supervisory labor for the event, which also was televised live on pay-per-view in the US and Japan.

PRG provided support for the Pride.33 Mixed Martial Arts performance.
"PRG offers an unmatched range of services and equipment, so we are a one-stop shop for productions of virtually any kind, size or complexity," says Joe Schenk, Sr., president of PRG's west coast operations. "Clients come to us, let us know what they want and we make sure they get it, with no hassles."

PRG built the three-level, 80-foot-wide stage with custom-fabricated scenery where fighters made their first appearance at one end of the arena as well as a raised ramp connecting the stage to the fight ring. PRG provided three 18,000 lumen video projectors for image magnification (IMAG) projecting onto a Kabuki curtain at the front of the stage and rear projection screens at both ends of the arena. In addition, PRG supplied all of the switching equipment to interface with the television cameras. They worked closely with the Thomas & Mack Center crew to display the images onto the house JumboTron system. PRG also supplied lighting and audio equipment.
Kilpatrick served as PRG's primary liaison with the Japan-based client, Dream Stage Entertainment. He and his PRG team met with the event's producers and designers; provided the production with a single, coordinated proposal; pulled together necessary services and equipment from appropriate PRG locations; and supervised the production from load-in through load-out.