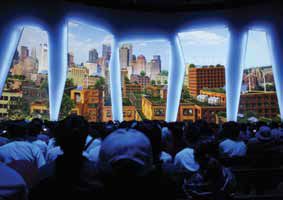 BURBANK, CA—With more than 190 countries and 50 international organizations participating, the sixmonth- long Expo 2010 Shanghai China is expected to attract between 70 and 100 million attendees. The USA Pavilion, which attracting over two million visitors in its first two months of operation, delivers its “Rise to the Challenge” theme in a series of Hollywood-style, multidimensional presentations that tell the story of the American spirit of perseverance, innovation, and community building.

Electrosonic provided BRC Imagination Arts with system technical design, engineering, fabrication, installation, encoding, and show technical programming for the AV and control systems in the pavilion lobby, preshow, and main show theater. BRC was the show designer and producer and created all content for the USA Pavilion. The company also coordinated the installation of the exterior, custom-framed Panasonic LED video display that showcases clips.

The Mainshow at the USA Pavilion is displayed on five 30-foot tall screens, each with a unique trapezoidal or hourglass shape oriented in portrait mode.

The Mainshow, or Act II, showcases the story of “The Garden” told with live-action imagery, CGI, and 4D effects such as vibrating seats, mist, and lighting. The creative film illustrates how a 10-year-old girl dreams of turning a vacant lot into an urban oasis and inspires her neighbors to make her dream come true.

The show is displayed on five, 30-foot tall screens, each with a unique trapezoidal or hourglass shape oriented in portrait mode. They are rimmed with LED light frames choreographed to change color and mimic the beat and mood of the content—833 lighting cues in less than eight minutes.

Electrosonic also provided the extensive audio, video, and showcontrol systems for the China State Shipbuilding Pavilion at Expo 2010. There, Electrosonic was challenged to deliver multi-image and edge-blended displays onto unusual surfaces and furnish immersive interactive experiences for visitors.

BASEL, SWITZERLAND—The State Grid Corporation of China (SGCC) commissioned Atelier Brueckner of Stuttgart, Germany to design the Magic Box, a cube which appears to float within the State Grid Pavilion complex at Expo 2010. Consisting of six giant LED walls measuring approximately 50 feet by 50 feet each the Magic Box contains a fully immersive 3D surround audiovisual experience. WSDG was brought in to create the electro-acoustical design for the space.